Designer Sarah Effenberger wants to bring back the lost elegance of men’s fashion. While she’s at it, she’s also showing us what equality equates to these days. Her Berlin-based label “Fomme” is a word play between Homme and Femme, which captures Sarah’s approach to garment design. Her pieces are about the adornment of the male body, individual fulfillment for menfolk and, most of all, the opportunity to express one’s true self without contest.

Sarah finished her MA degree at the University of the Arts Berlin in 2015 and in her first year out, she launched her inaugural collection during Berlin Fashion Week at Vogue Salon. Her latest winter collection is a playful balance between dexterity and reliability, both modern and nostalgic, and invoking beauty from a bygone century. 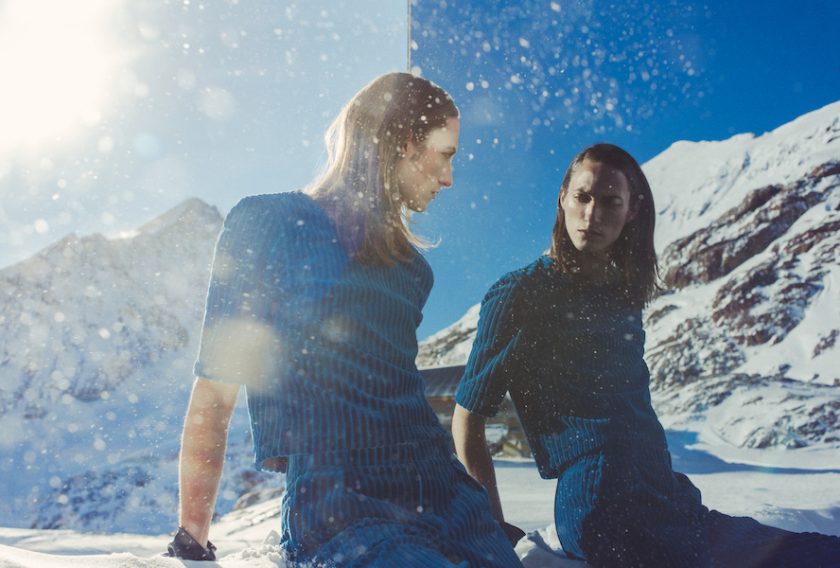 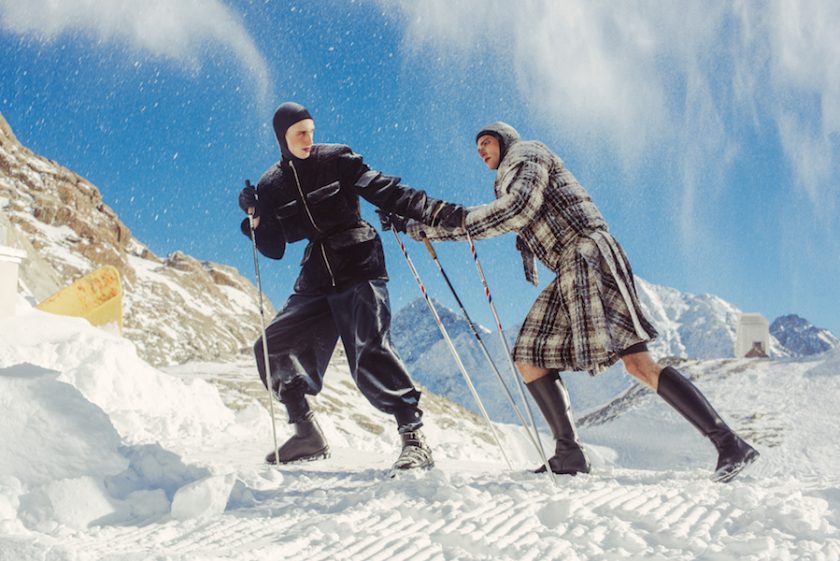 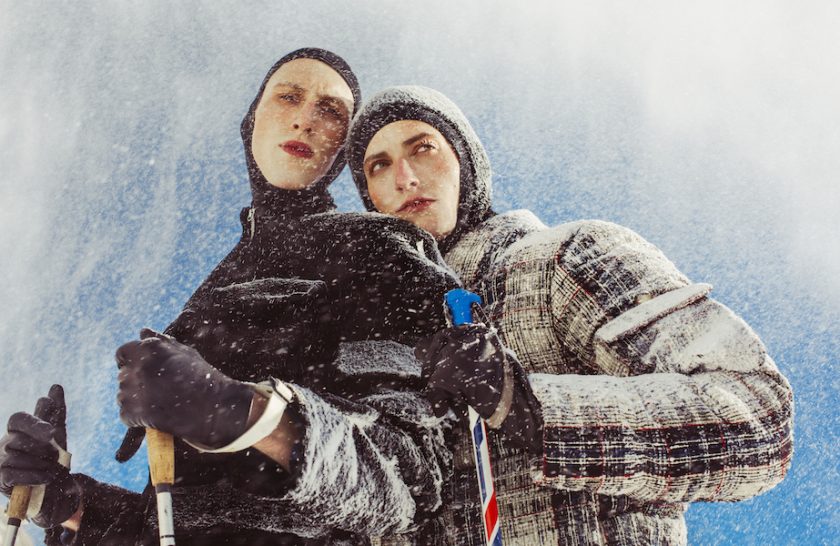 Œ had a little chat with Sarah at her studio about her inspirations, favourite muse and current collection.

What do you want to embody with your brand Fomme?

I want to show another possibility of fashion society. I am not the first one who is doing that, obviously. Raf Simons, for example, was the first one who made the man a little bit more feminine. I would like to give men another chance to be dressed up in a more fun way. Men can be more than just serious. For me the equality in society is not really equal yet. Women fight for several times now, that they can be equal in jobs and also in fashion. With a suit, they can be serious in the morning and in the evening they can go out with a slip dress and nobody would ever think about it or doubt it. There is a big range of clothes in the closet of women, but for men, it is not that easy yet. They can’t go out with a slip dress. I don’t want them to go out with a slip dress, but I do want to open it up a little bit more. They should be more fancy and more elegant and sexy. This all should be enabled without losing the seriousness. That is very important for me.

Who inspired you to make a difference in menswear?

I guess I inspired myself, to be honest, which is a really stupid answer. I always made menswear and I also was in the menswear section at University. I think what was inspiring was that I was always doing it a little bit more feminine. I think the first time I thought about it was when my professor was asking me, “Why do you do that for men? Women can wear that as well.” She was always wearing my clothes and she said, “Oh that looks good on me!” That was the first time when I was thinking, “Yes that makes sense.” Designing is always kind of a sexual thing. Either you design as a woman for yourself, to make yourself more attractive or you design for the other gender, to make the other gender more attractive. My way is a little bit in between. I am always designing for myself as a man. I would always ask myself as a designer, “ Would I wear that as well?” And I am a woman, so that was actually the beginning. When it came to my masters degree, I made it to my topic to think about unisex and what I don’t like about it. At the end, it neglects the gender completely and that is what I don’t like. I like the mixture of gender and also showing the gender to everybody so they see that we have different sexes.

Why is this topic so important to you?

I guess I am a masculinist or something. Maybe because I was never raised with any boundaries. I had a big brother and I have been always both at the same time. I had my Barbies, but I also had my matchbox cars. Maybe that is the reason why I create menswear for myself. I see myself as a very strong woman, who was brought up by very strong women, like my mother or my grandmother. My grandmother was always the person who did everything in the family and the men were just joining in (laughs). I mean there is this gender discussion all the time. I am always asking myself, “Why do you have to fight so much?” It somehow annoys me a lot, I can’t deal with it, because for me it was never a question. 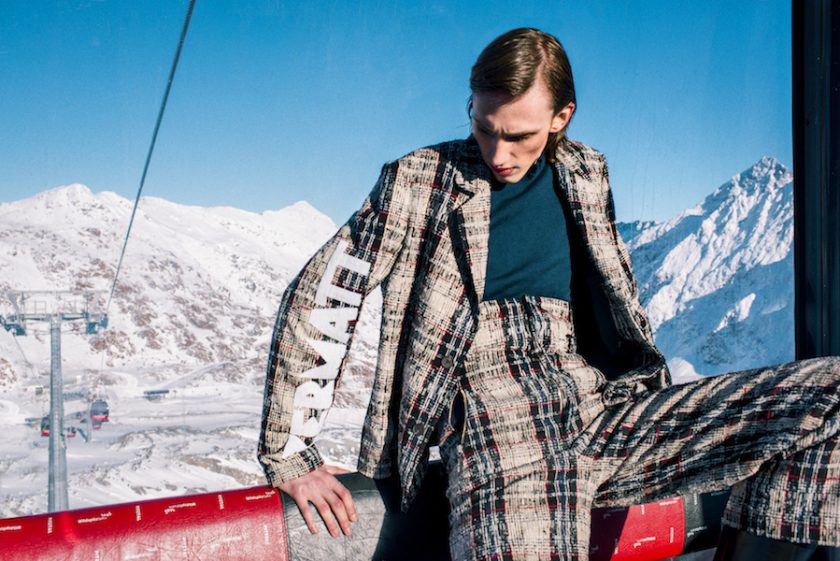 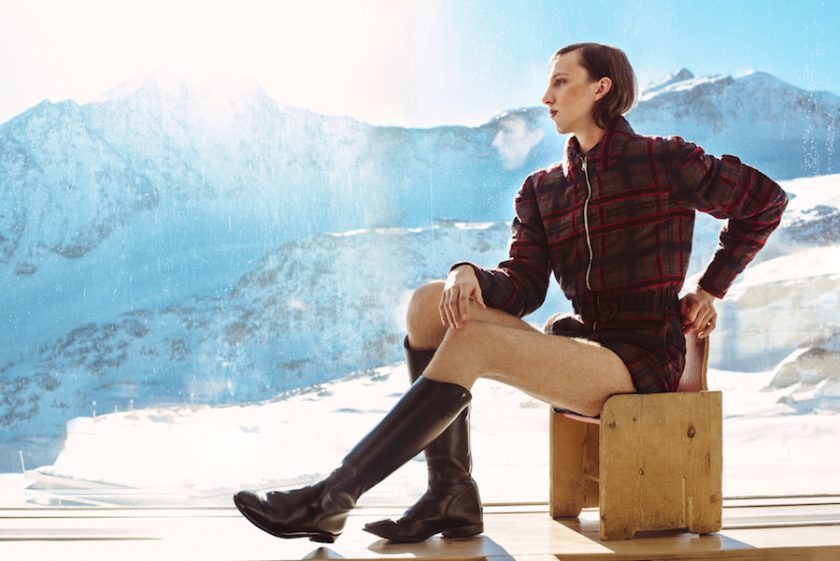 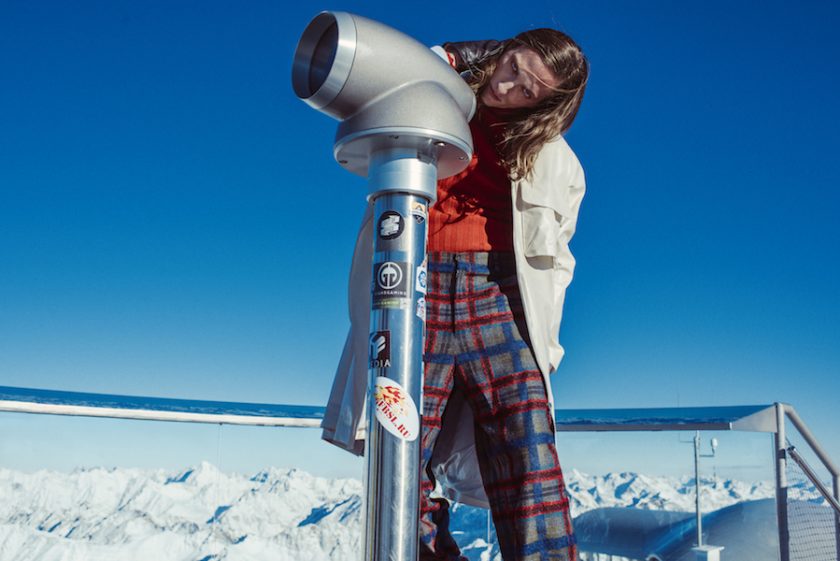 Which similarity in womenswear and menswear do you want to highlight?

The ones we lost. There were many more similarities before industrialization. Industrialization gave us a lot of great seriousness and it’s not that I don’t love the suit, I really do. I also love serious and casual menswear, but in my opinion with the suit we lost everything, which was similar before. Dressing up in a crazy way, going wild in silhouettes, that’s the main part I want to highlight again. To tell men and women that they were quite equal in dressing up and it’s not that only the woman was the brightest pearl in the relationship. It used to be the man. Our generation doesn’t know that at all.

Why do you think it’s still necessary to give menfolk more expansion space?

Women are always asking for equality and don’t get me wrong, I am also a feminist, but I am not a person who just sees it from one direction. I am also observing it from the other side. I am so proud of all the women and what we already achieved, but at the same time we have that conflict that if a man is raising the children, we still think that this is not ‘a real man’ and not his job. I would say this is still stuck in our head. And we have the same thing with clothes. Of course, we still need the two extremes, because otherwise you can’t create the wonderful things for the persons in between. That’s what I try to do with Fomme.

What do you want people to feel when they are wearing your clothes?

I want to put extravagance on them, in a sensual and playful way. I want them to be confident. The clothes should make them feel stronger. My clothes come in a couture approach, but at the end it’s streetwear. It is very casual but also very elegant, so you don’t have to be afraid to wear it on the street.

Which kind of man do you have in mind when you start designing your collections?

Klaus Nomi! (laughs) At University I took quite a long time to find out whom I am designing for. And this is such an important question. If you don’t know that, it is really hard to get new inspirations and to get that path you want to stay on. My masters degree was mostly about finding this particular person. And for me, it’s definitely Klaus Nomi. There were other people I had in mind, but there are all from the last centuries. ‘Nostalgic’ is the word of Fomme and I am also very nostalgic in finding a Muse. It is mostly a man living around the twenties to the seventies, mostly before daily wear became casual. Where men and women were dressing up for their daily life. This sleekness and extravagance was fascinating for me. The attitude of another time is my inspiration. It’s not that I am just designing for these people. I need that to get active, but I also want to see my clothes on other people to get another twist. My mission is to give the elegance back to the people.

Why Klaus Nomi? What is so fascinating about him?

I guess you don’t really select a muse by yourself, they just come across your way. But he was simply an insanely shimmering and inspiring person with a touching history. He controls an insane elegance and curiosity in his appearance and also in his silhouette. In addition, he was an absolute outlier in breaking gender roles and he was the one who represented the ‘in between’. 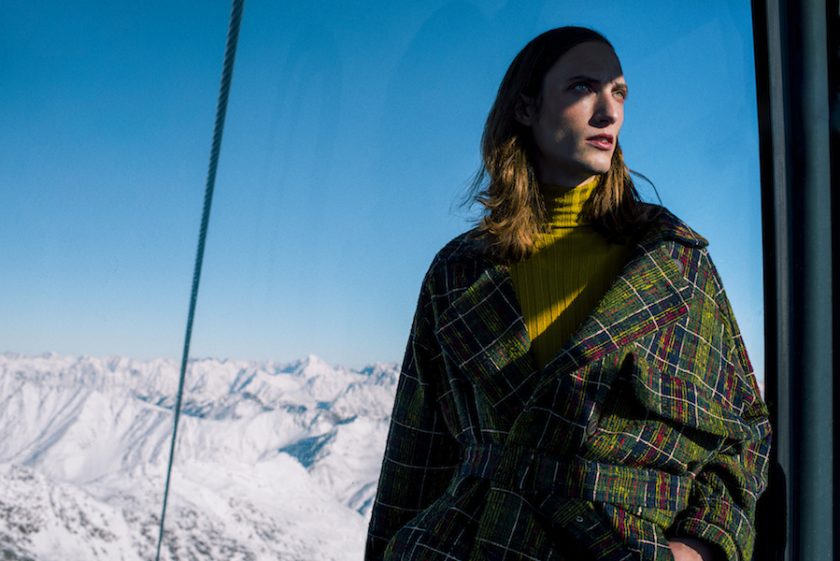 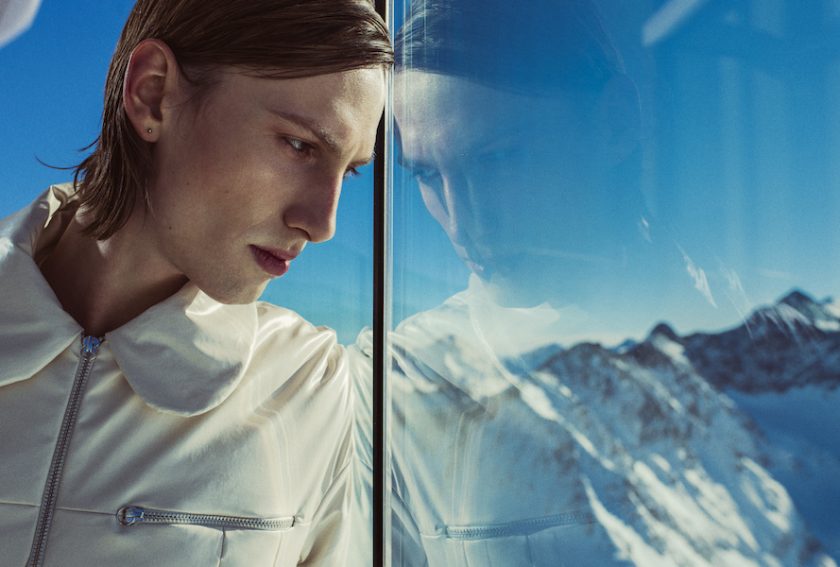 What was the focus on your newest AW 2017 collection?

Dressing up for a special occasion. My main approach is to look out for events in daily life where people used to dress up and that is also the most important part of my collections. My mother was always telling me, that she was dressing up when she got on the airplane. I really didn’t get that and that’s why I am so fascinated by it. That’s what I am searching for and I guess that’s what Fomme is actually about. I am from the Alps so we thought about skiing as a special occasion. If you look at skiwear nowadays it is just to protect yourself and not to be cold, so we tried to change that. You can say that we always send Klaus Nomi on a task.

Next to the gender question, are there any other issues that you might want to discuss through your clothes in the future?

Besides the gender questioning, it’s all about dressing up and elegance, which I am missing. That’s why I am getting most of my inspiration from the last century. For me, it’s very clear that people started to get more casual. The 2000s really were a big cut in society. It was all about speed. Speed up to the next century, speed up to the future. We just wanted to take the next step as fast as we could. It was the fastest century of human history. We speed up so quickly in everything, also with fashion. We are as far as we can go away from fun, because fun would be called responsibility. But this is what I want to do with Fomme— have fun again, break free and enjoy.

Having talked about the future, what are you currently working on?

We just started with the new collection, which will have a very nice and dusty topic as well. It will be shown in June and It’s going to be dusty, dusty and dusty in a very modern and shiny way. High society, to drop a word (laughs).

All images via Elizaveta Porodina 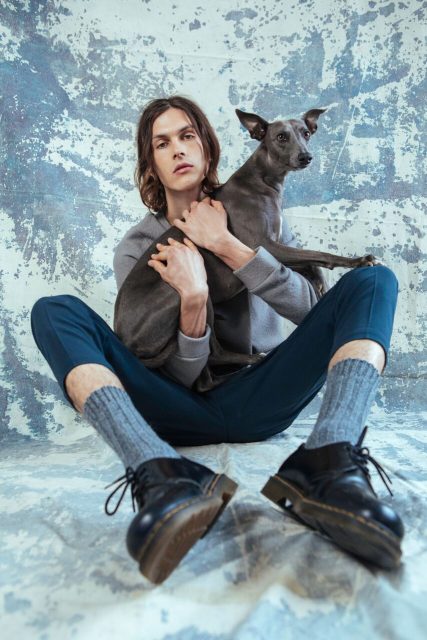 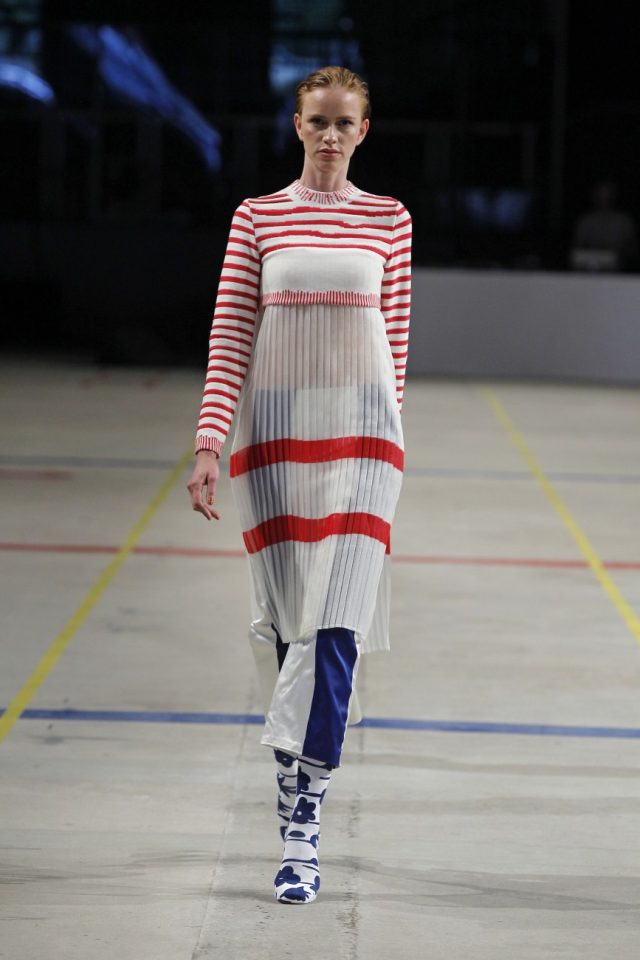 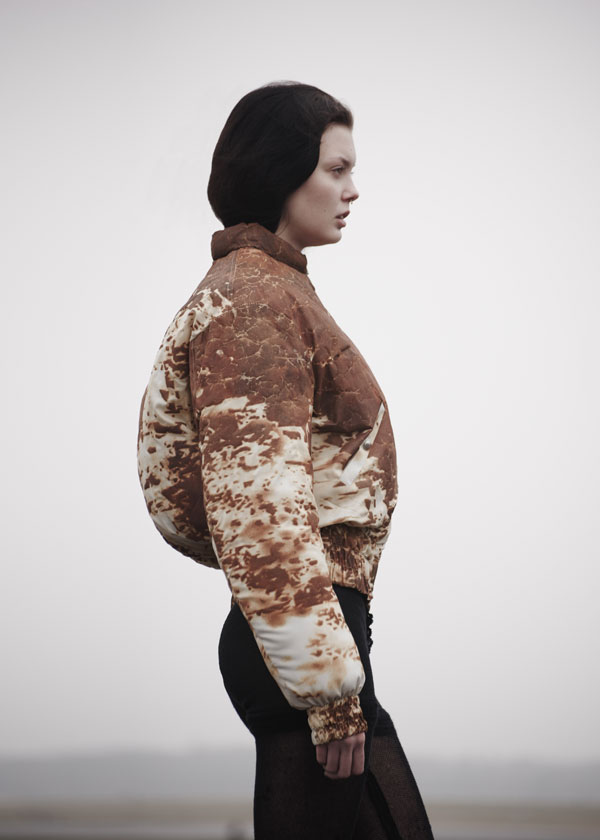 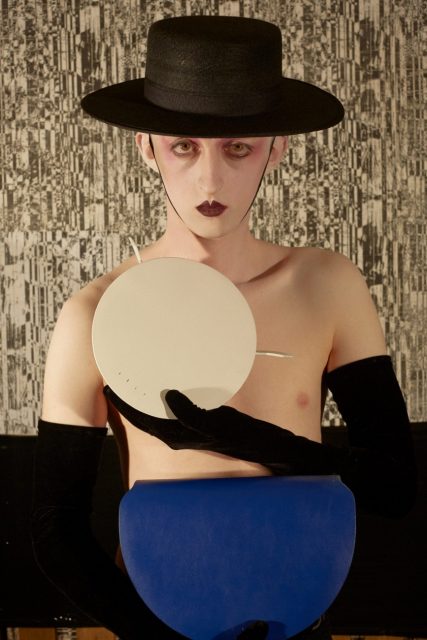 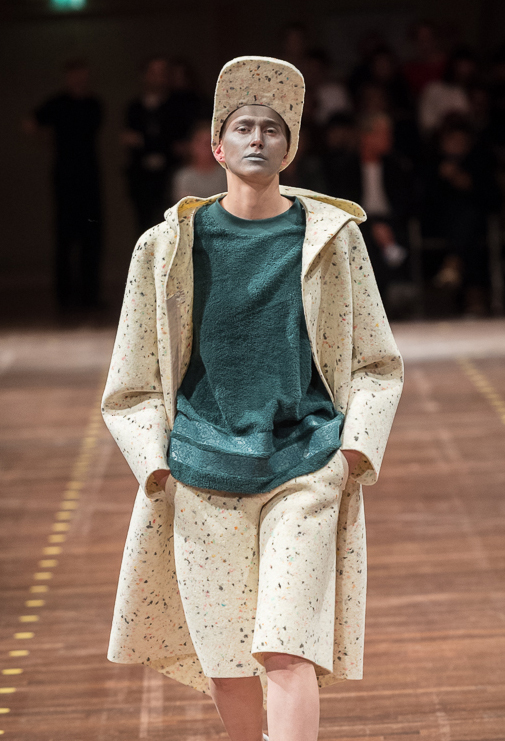