Many question are yet to be answered and many boys are yet to be questioned! This week we talked to Fashion editor Salome Mallari who shared his thoughts on queer performativity and clothes that stand up to conservative thinking. 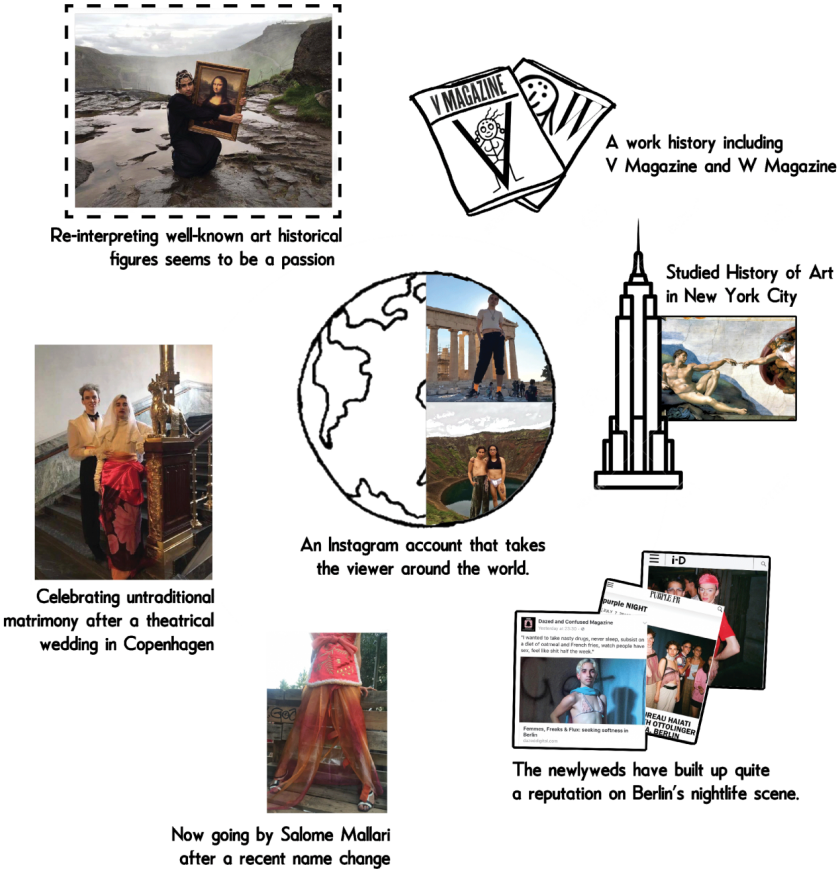 Œ Magazine: Your job as an editor has everything to do with fashion, but what can you tell me about clothes in your everyday life?

Salome: Clothes have been a passion since I was tiny. Halloween was always my favorite holiday. I loved dressing up. I didn’t even decorate my bedroom. The whole thing was just one big closet (laughs). The way I dress is also how I meet my friends. It attracts the people I’m interested in because, you know, it’s a huge expression of my identity and personality. For example, I don’t really identify with any gender, but I feel quite feminine so fashion is a way of expressing that.

Œ Magazine: Where did you grow up?

Salome:  In north Florida and I can tell you fashion there, isn’t my thing at all. It’s very very conservative: men in business suits and woman in flowery dresses.

Œ Magazine: How do you dress when you go back to Florida?

Salome: Well I go back once a year for Christmas and I definitely tone down. My clothes have already caused a lot of stress between me and the people there. What I wear here is not really okay for them.

Œ Magazine: Why? Because it attracts attention?

Salome: In a way, yes. Because it makes my attitude towards conservative thinking very obvious. 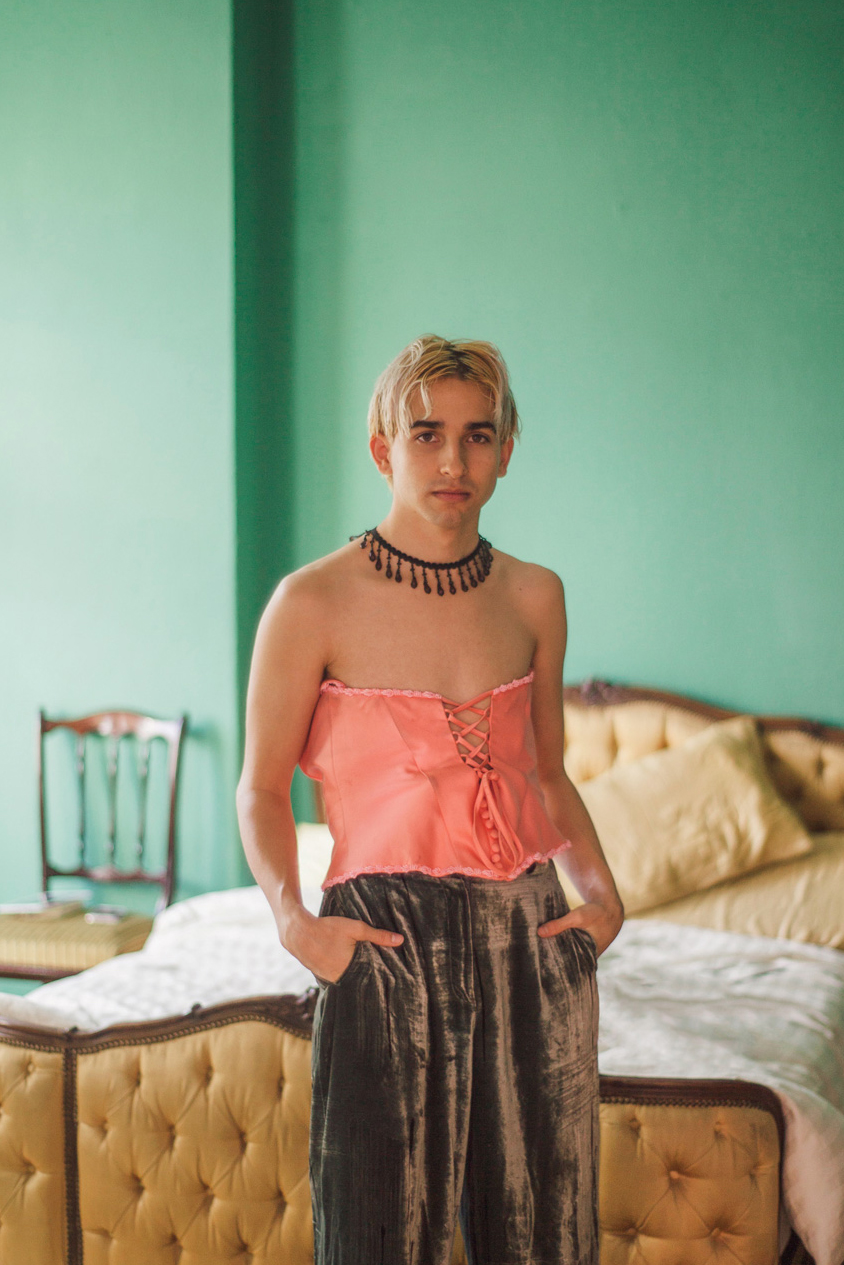 Salome: I moved here from New York, where I studied, three years ago.

Œ Magazine: Has your style changed a lot since then?

Salome: Definitely. Because in New York I was in school four years and then worked for one while here I’ve been freelancing and got to explore what it’s like to actually be part of a city at a certain time in history. In Berlin the party scene and the queer scene are a big part of our time. So a lot of my fashion has changed to reflect the change in lifestyle I’ve had here.

Salome: It’s more outlandish and colorful and less professional I guess. In New York whenever I would dress super feminine or super crazy, which was rather rare back then, it would be met with a lot of approval and enthusiasm. People were into it, whereas in Berlin it’s a very masculine oriented scene. The party one at least.

Œ Magazine: What do you mean by masculine oriented?

Salome: It’s considered much more sexy for gay people to be masculine and straight-acting and people assigned male at birth yet wear feminine clothing are not highly accepted yet.

Œ Magazine: I’ve heard that one before…

Salome: Yes It’s not the status quo. And I feel very much in minority.

Œ Magazine: And this is not the case in New York?

Salome: No, there it’s quite developed. And Berlin is only starting to get there. Which is kind of interesting because I feel like Berlin is much freer than New York in terms of mentality and, for example,  when it comes to sex. So the macho worship is ridiculous to me. And it’s really not something I’m about. When I dress up it’s also to fight that and make sure there is like a “presence”.

Œ Magazine: Does the outfit you are wearing reflect that? That fight.

Salome: Yes. And I’m actually thinking of creating a label. A sort of theatrical early 2000 princess label. That’s the direction I’m going for! 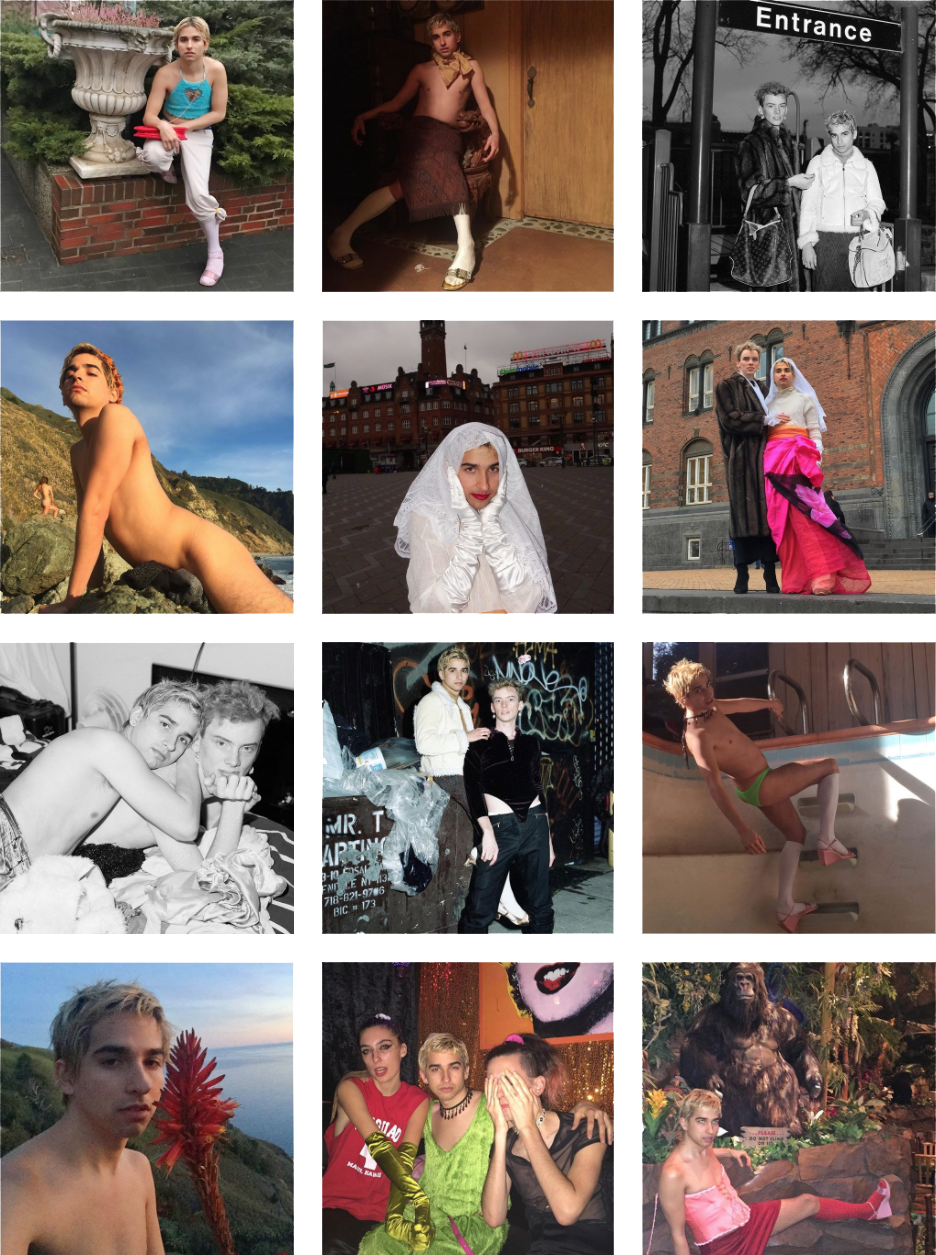 Œ Magazine: The sort of thing that would work in New York! But what about Berlin?

Salome: (Laughs) right! Not so much, but that’s one of the reasons I want to do it here! It would be a bit of a political statement because the models featured would be all unconventional, mostly trans, and that’s something I really care about. But, yeah, I want to do it in Berlin first and then take it to New York.

Œ Magazine: What is something that had an impact on you fashion-wise and inspired you?

Salome: Definitely Margiela’s last show. With everything absurd that has been going on, politically speaking, Galliano’s work really is an important reminder of the need to dress even more freakishly and stand up to conservative thinking!

Œ Magazine: Do you feel like this is a common attitude within your generation? Protesting by not giving into conventions and restrictions when it comes to self expression in things pop culture related.

Salome: A lot of my friends are on the same page, yes. Especially the people I relate to in Berlin. And that’s one way social media is great in my opinion. It unites those to whom personal style is a cool way of celebrating freedom of expression.

Œ Magazine: Would you say that you belong to a scene?

Salome: Here in Berlin I feel part of the queer scene. Like both the political one and the party one.

Œ Magazine: Can you think of a few typical attributes for this scene? 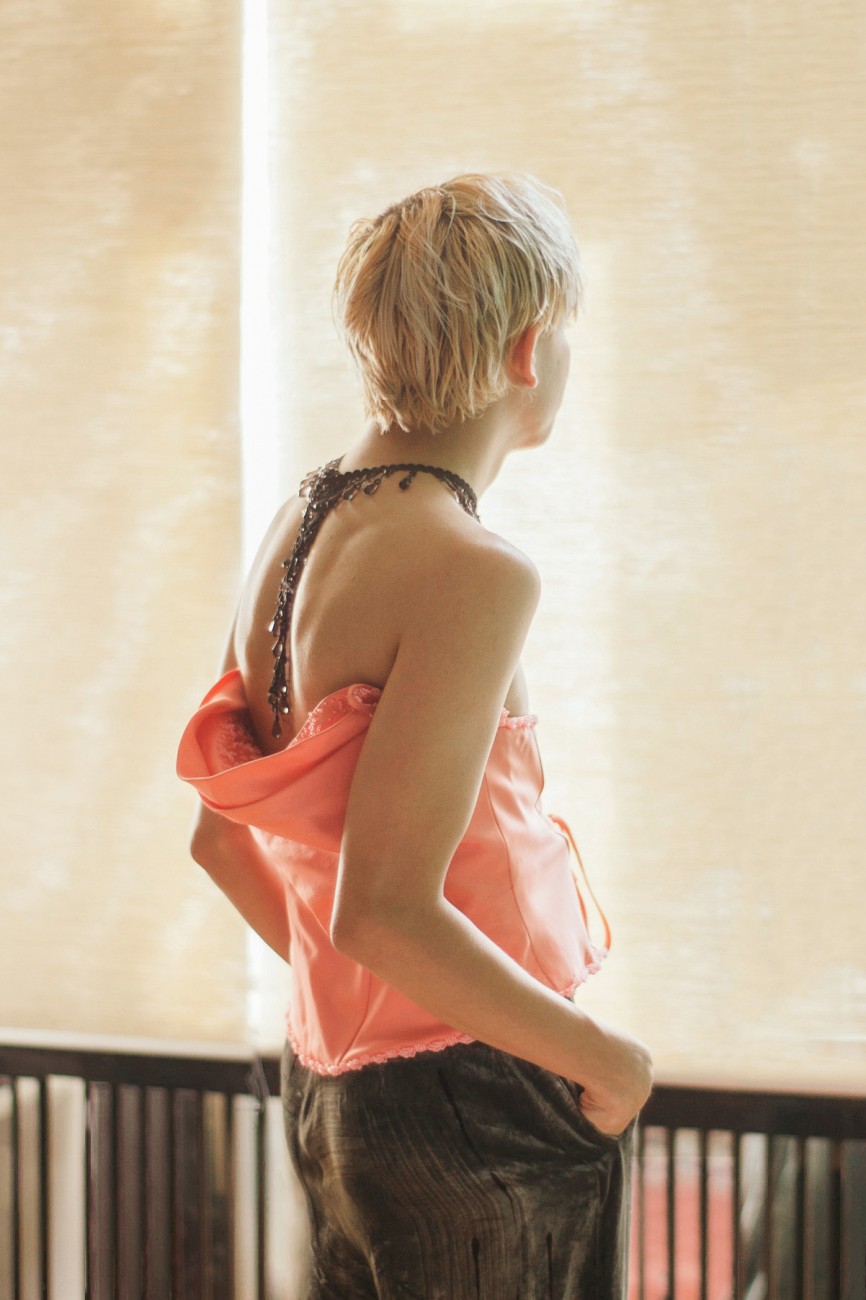 Salome: I guess most of the bonding happens by going dancing, dressing outrageously and having a hedonistic time! Although the queer community in Berlin feels a bit of battle zone at them moment. Unlike New York where people in the, say, equivalent scene are very united, there’s more of a tangible division between say, Berghain all-black fashion and more artsy, femme self-expression. The latter tends to be drowned out by the former.

Œ Magazine: I see. You made the association between macho scene and Berghain. Which places are representative of your scene? Where would you go out?

Salome: There’s parties like Cocktail D’Amore at this club called Grießmühle, and our friend Olympia puts on a night called Get Fucked that is like all femme drag performances. Again, a place for people that love twisted self-expression and don’t celebrate restrictions such as uniforms. That’s why Berghain isn’t that interesting to us. People there have this very clear dress-code.

Œ Magazine: Can you think of any other scenes in Berlin?

Salome: There is definitely an art student scene that centers around UdK. That’s something me and Matthew (my partner) get a glimpse of from time to time, at a random party or school exhibition. But there is so many other scenes! But fundamentally I would say there are these two separate worlds: the queer one and the straights one, and then within there are many different factions. 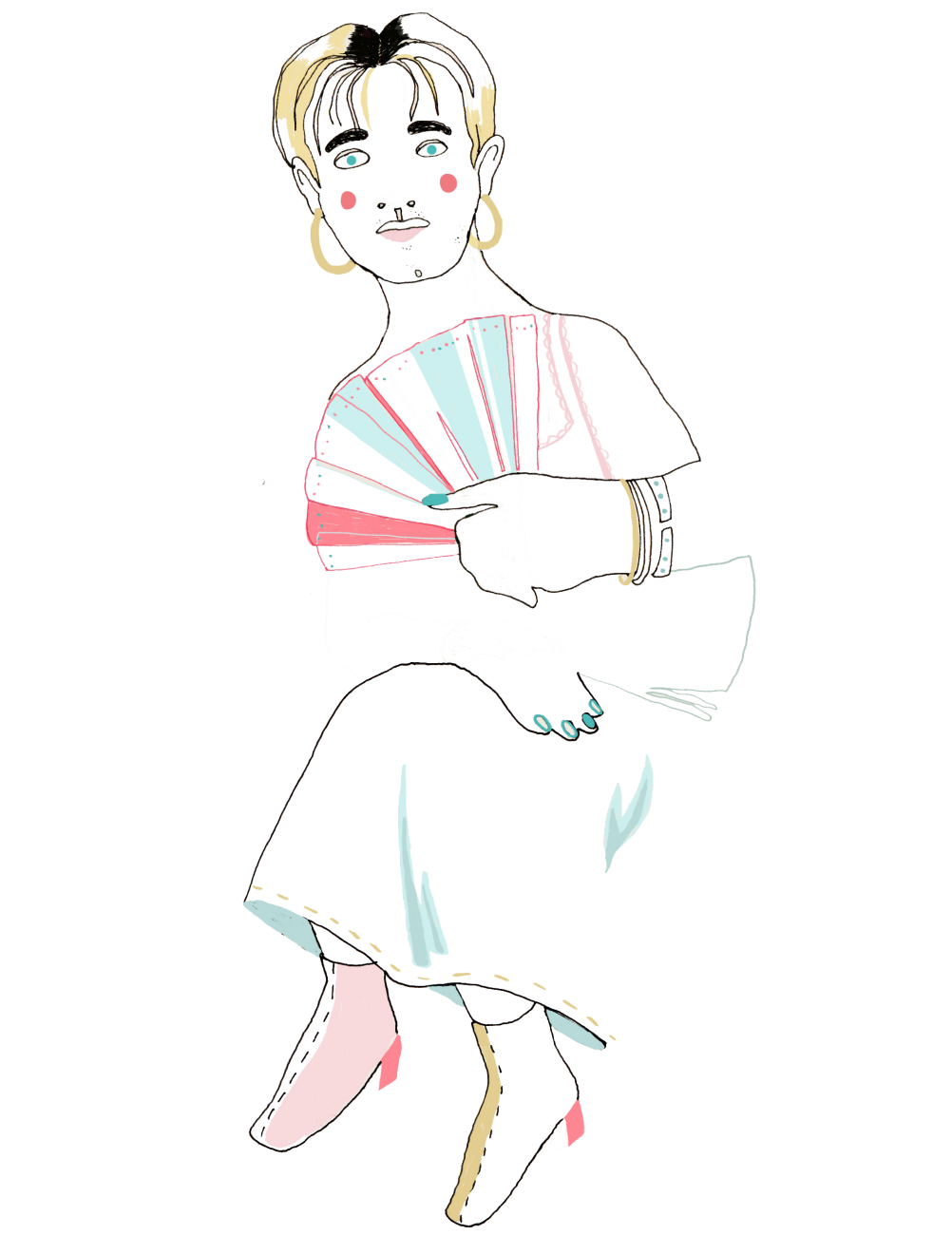 Œ Magazine: You mentioned politics a few times and now you are talking about factions. Self-expression has a political value, no doubt, but when it comes to fashion, the line between self-expression with political purpose and self-expression as a form of self-indulgence is quite thin don’t you think?

Salome: Yes. In the end it all boils down to awareness. Nine months ago we went to a random performance night which got me thinking about masculine and feminine performativity, and that’s when I started thinking about the political implications of what might seem like a silly fashion issue. Up to that point, I would get dressed because I liked the clothes, it was about me and the clothes, but, the thing is, no one is free from fashion! Everyone has to be a part of it. And it was at this event that I realized, wait, this outfit, this choice, makes me a part of something collective, bigger then my love for fabrics and colors. It might mean something. Realizing that and taking notice of these bigger intersections changed the way I wear the same clothes. So ultimately I think it’s this awareness and realization that makes it political.

Œ Magazine: Touché. And this didn’t change your style?

Salome: It just made it bigger. It amplified it.

Œ Magazine: What is something that you feel very confident in these days?

Salome: That it’s pink (laughs). I have a lot of favorite pink outfits.

Œ Magazine: Where do you look for these gems?

Salome: Most stuff is from thrift shops or friends. 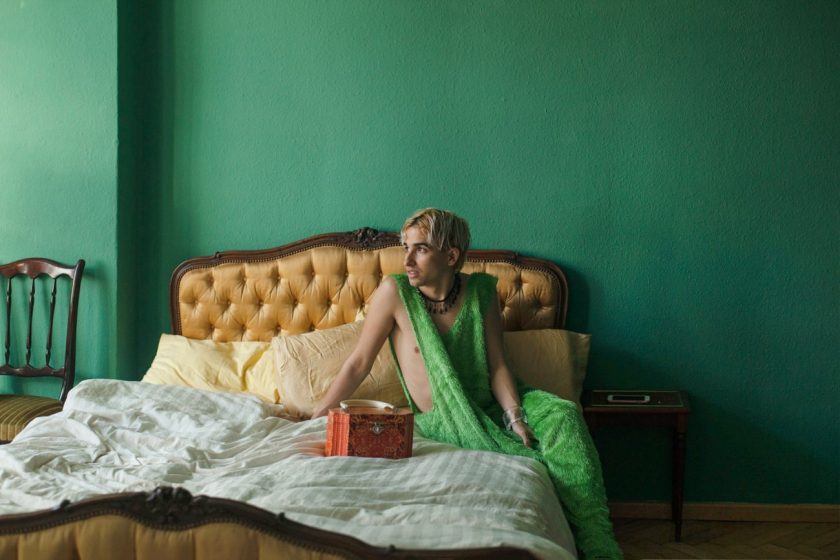 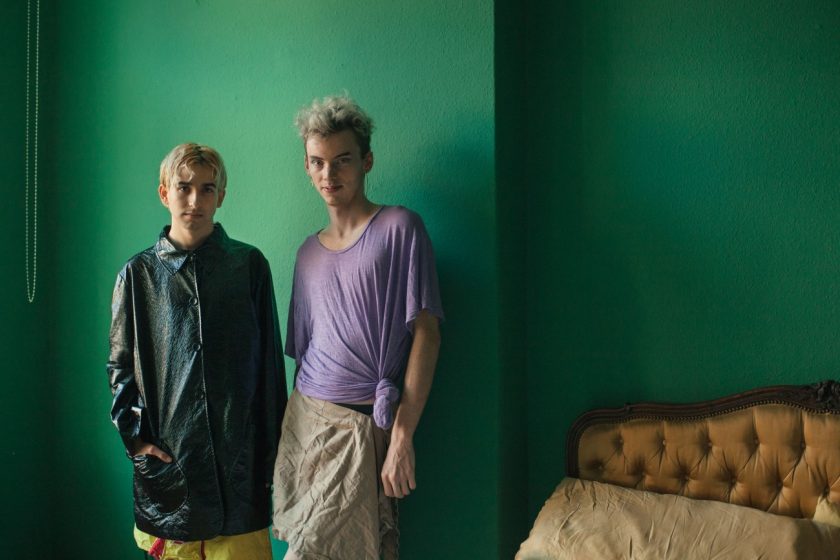 Œ Magazine: Do you ever borrow clothes from your partner?

Salome: Oh yes! Matthew and I do it all the time. What you see is like one big closet.

Œ Magazine: Do you ever coordinate your outfit with Matthew?

Salome: We rarely plan it out but when you live together and share wardrobes you somehow end up looking similar.

Œ Magazine: You both seem very fashion aware. What is the first thing you noticed about one another’s style?

Salome: Well I was in my pajamas! (Laughs). And you were all about the 80’s back then. Now you try to be more elegant.

Matthew: To me you seemed very clean and New York-ish. It was something I hadn’t see in Europe before.

Salome: Well I don’t know that I was ever a minimalist, but in the beginning I just had the minimum with me. I just had like 5 outfits.

Œ Magazine: Do you go shopping together?

Salome: Well we always go to Humana. It’s a ritual. We go there every Friday and get an outfit for the weekend, mainly from the costume and ball section. Our freeelance budget is a bit tight so it’s the best mixture.

Œ Magazine: What’s the craziest thing you ever wore?

Salome: I once wore this carpet right here (laughs)… as a dress! 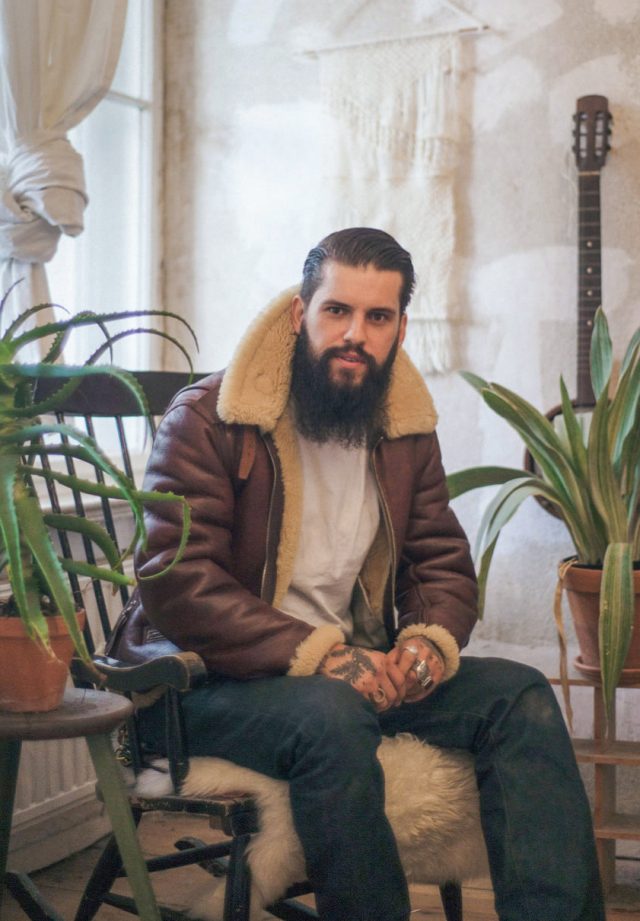 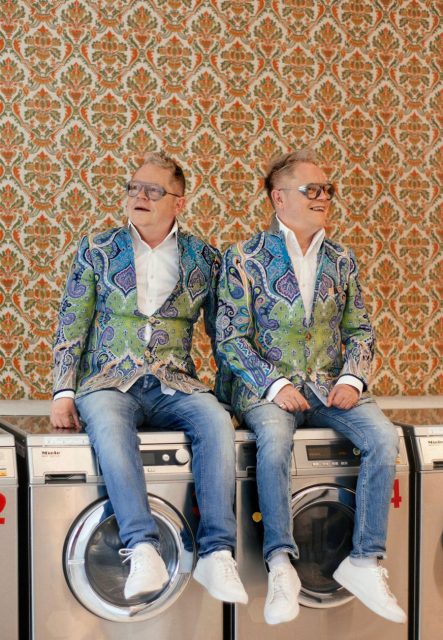 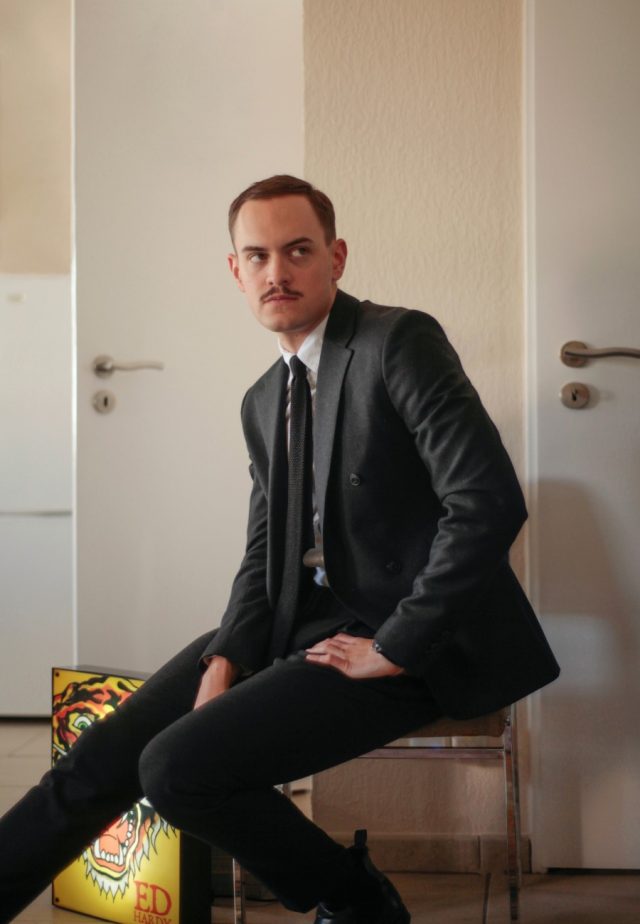 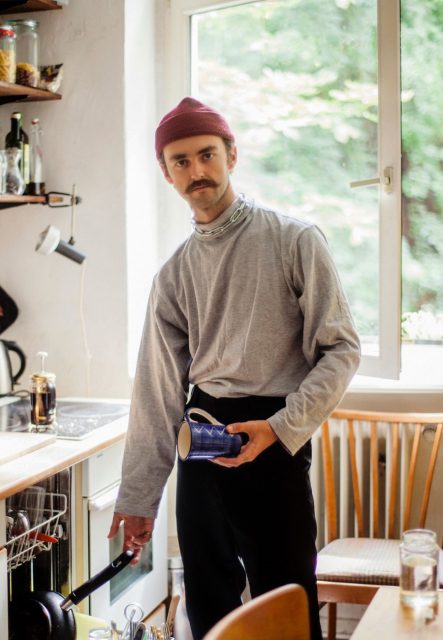