This won’t be the first time that we’ve sung our praises of the talent emerging from the tranquil Alpine confederation; indeed, as previously established, Switzerland is often perhaps unfairly overlooked in favour of the industry powerhouses with which is shares its borders. Today, however, our spotlight turns from the young designers working to reform the fashion image of their nation, renowned above all for its ski resorts, balk-worthy prices and efficient public transport, to what will be their successors, the fresh graduates of Fachhochschule Nordwestschweiz’ Institute of Fashion Design.

Œ was fortunate enough to be invited to attend the Bachelor class of 2016’s graduation presentation, the culmination of three-and-a-half years of dedicated work on the part of each of the faculty’s 21 students. Taking over a repurposed space at Basel’s Museum der Kulturen, each student rose to what in many cases was their first major industry challenge, presenting to a mixed audience of members of the public and various international press outlets. While all displayed great potential, here are the three that will no doubt be popping up on your radar closer down the line than you might think. 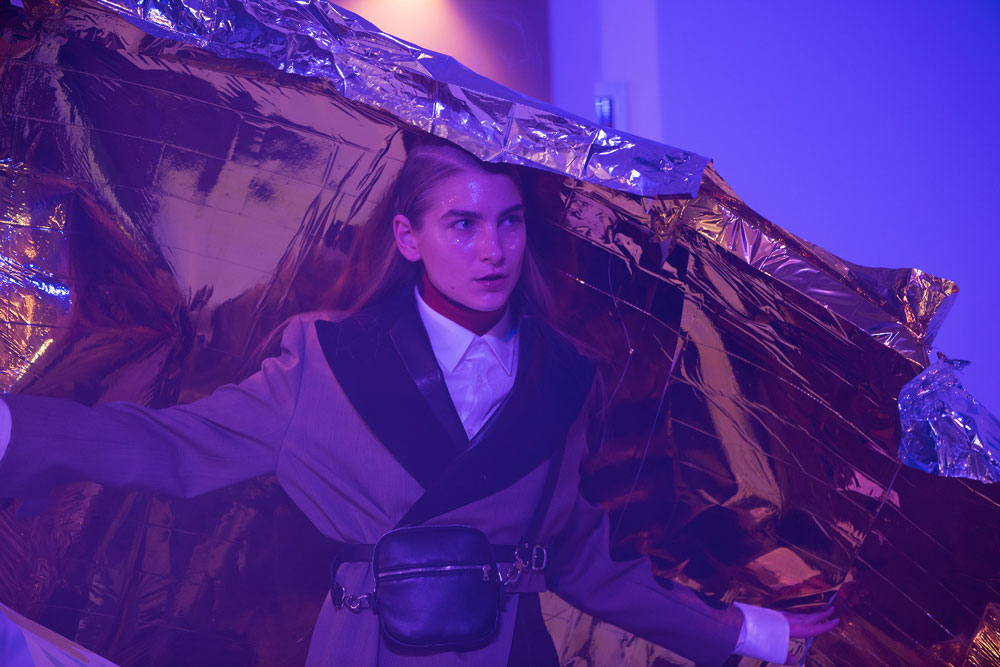 Opening the ceremonies was Nicolas Vetsch, whose models crept onto the stage under a misty cover of darkness before climbing into what appeared to be over sized Mentos tubes (this seems to be a recurring motif across the Vetsch empire; the designer’s ‘business cards’ are in fact customised packets of the scotch mint sweet – mint or fruit, as per your wish). Prologued by ‘Gretchen trying to make fetch happen’, from early noughties cult classic Mean Girls (those with a basic grasp of German diction will see the pun at play), models burst from their cocoons in the boxy jackets of a distinctly sharp cut that served as the technical lynchpin of the collection. The influences of the names on Vetsch’s decorated CV, astoundingly so for a fresh BA graduate, Eckhaus Latta and J.W. Anderson among them, made themselves especially known in Vetsch’s impressive range of materials, with tactile croc textures and gleaming stiff silks fuelling the rigidly, near militaristically, tailored template that pervaded the collection. The tweaks of playfulness, however, deserve due noting, with pieces emblazoned with cartoonish bubble writing and the open side seams of a coat transformed into an interlocking jigsaw. 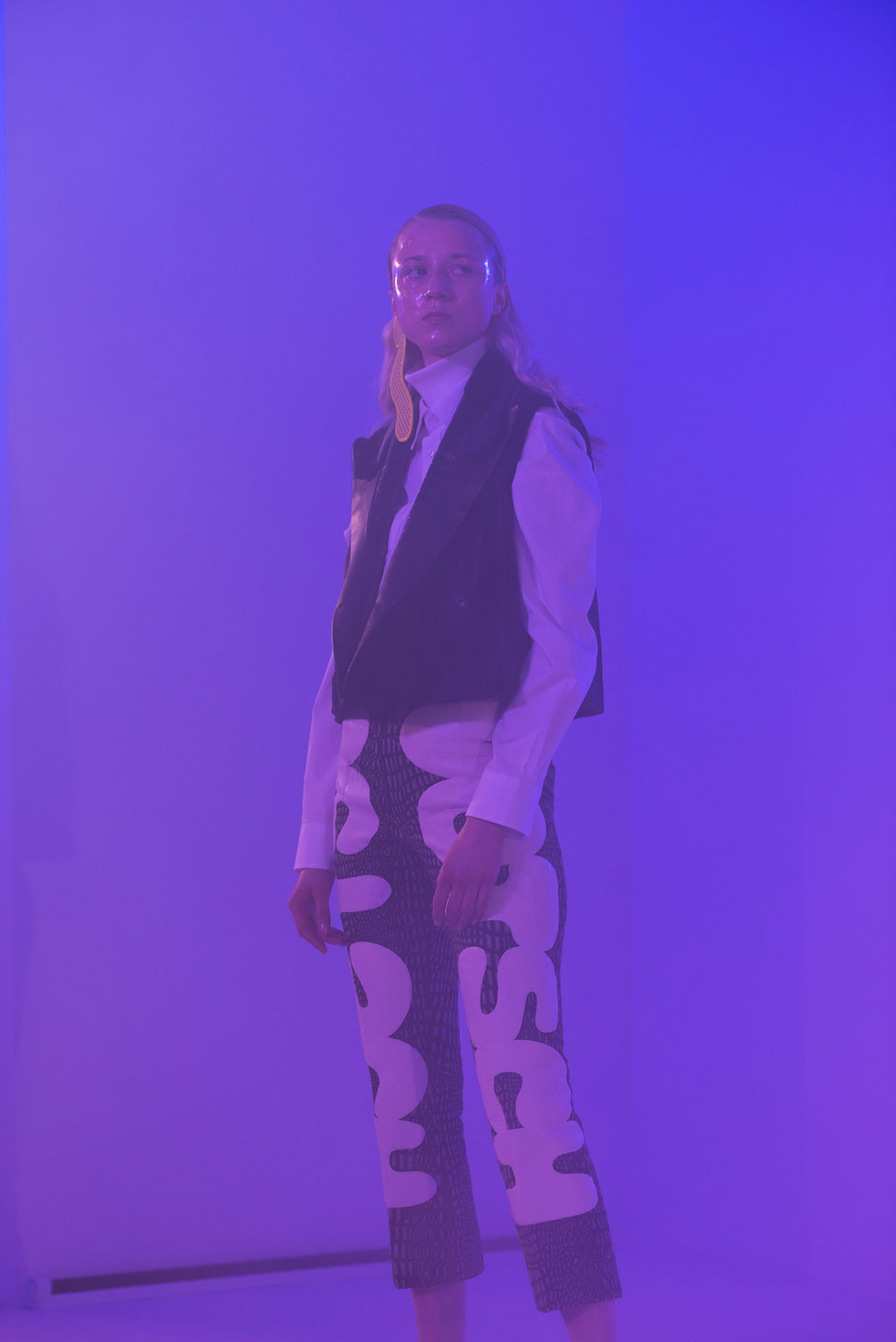 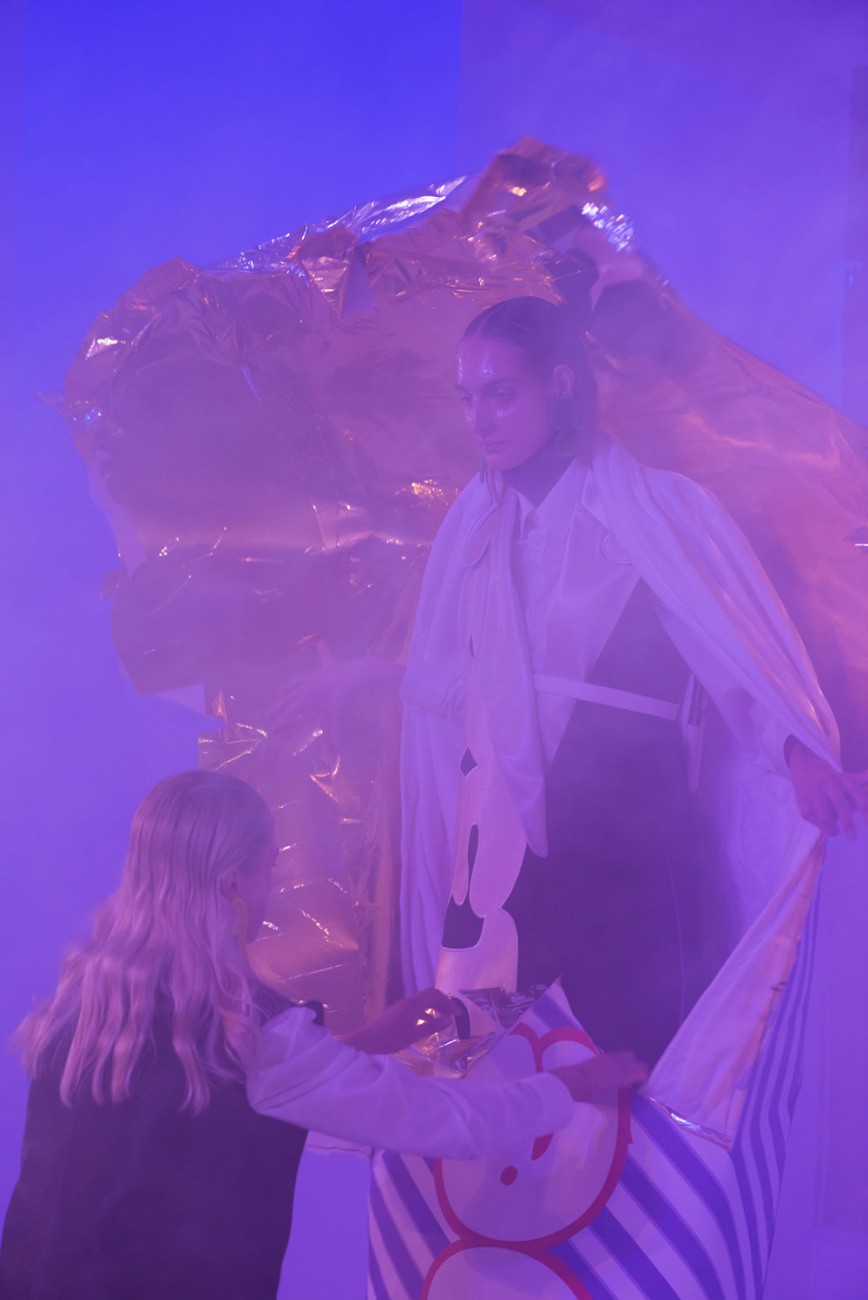 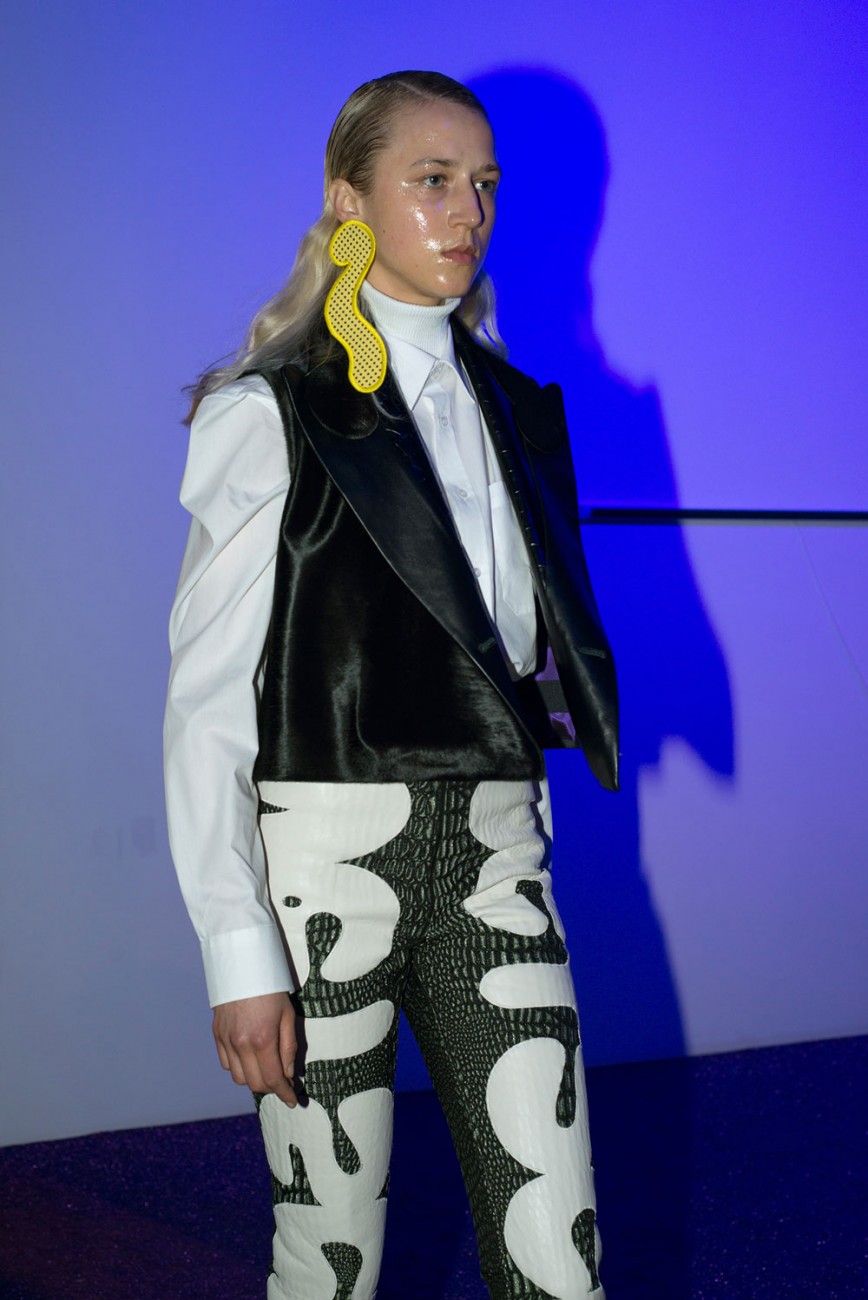 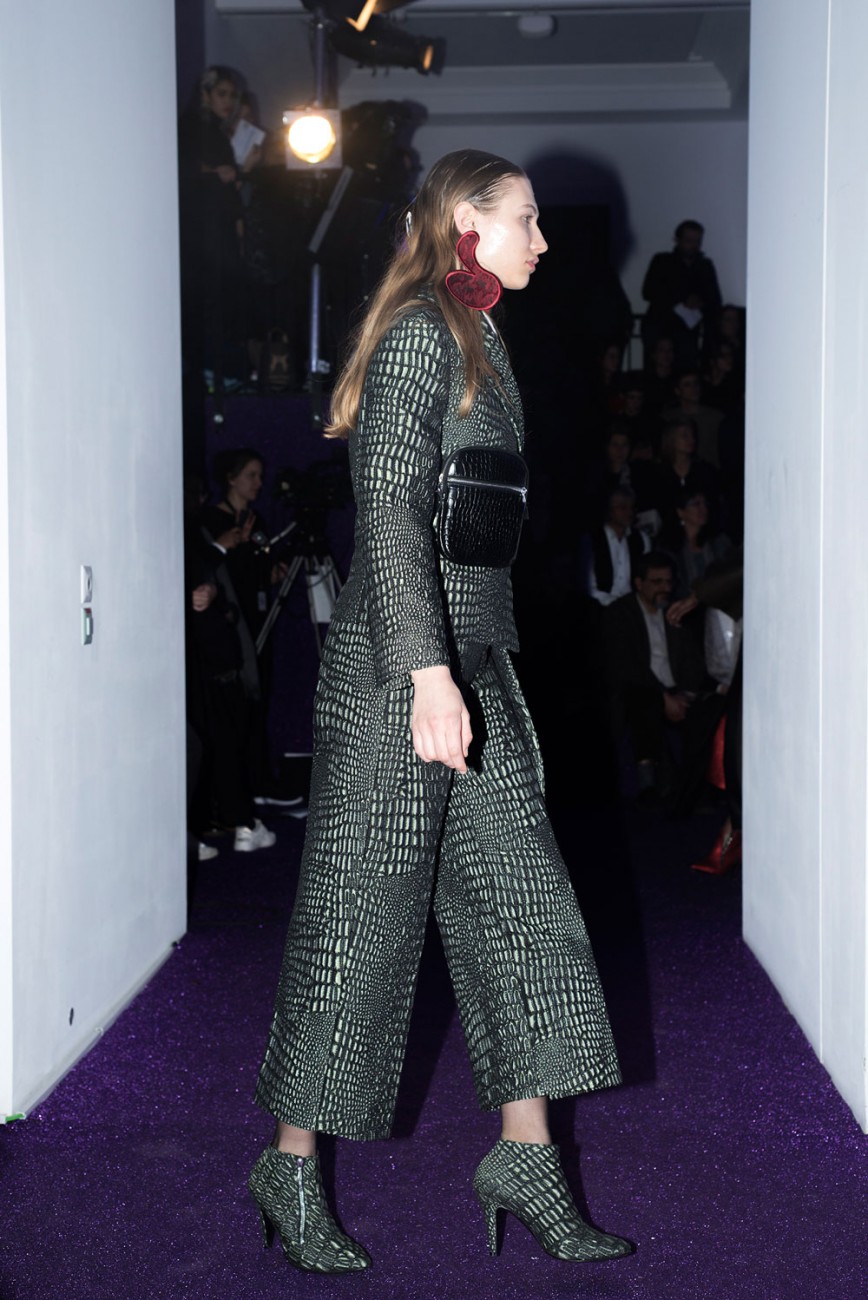 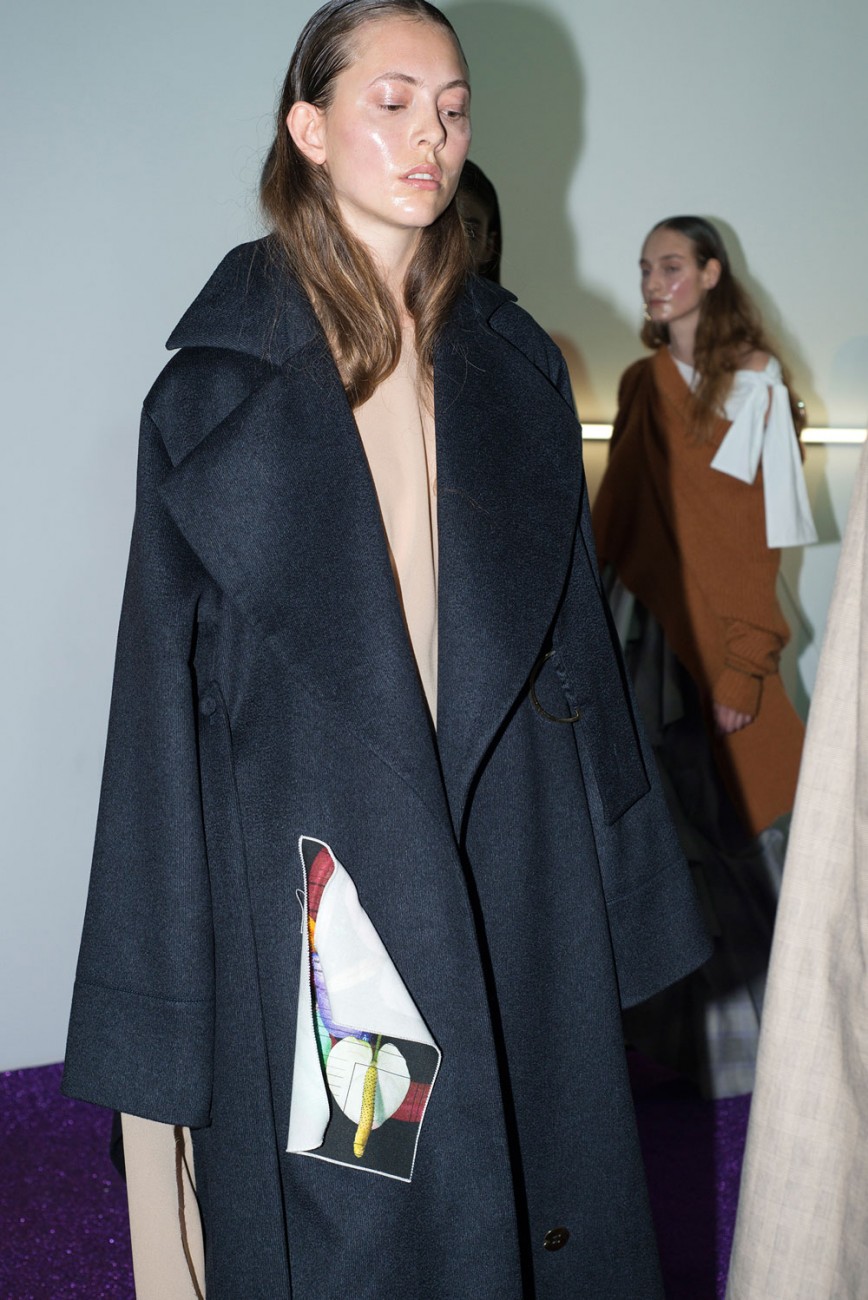 Sherylin Birth was among the hottest tipped of the class cohort, exclusively featured on Not Just A Label in an anticipatory profile prior to the main event. Describing her work as “[e]ffortlessly raw chic”, Birth designs “real garments” for a real, modern woman, taking inspiration from the typically masculinised codes of down-to-earth dressing. Such can be seen in the heavy woollen great coats, entirely devoid of the exaggerated tailoring that has since come to be synonymous with empowered femininity. But this was no simple attempt at a masculinising or androgynising of form; distinctly feminine touches accentuated the collection, with flows of azure blue chiffon, a white satin-y dress of billowing ruffles and floral accents offering a welcome lightness to the slouchy, yet altogether sturdy, woollen forms as the models languished dreamily across the stage. Yet Birth also deserves particular praise for her accessories, which stood a full head and shoulders above the rest; in what could serve as a succinct motif for her creation of down-to-earth feminine garb, the spindly heels of stilettoes were encased in a simple-yet-substantial wire cages. 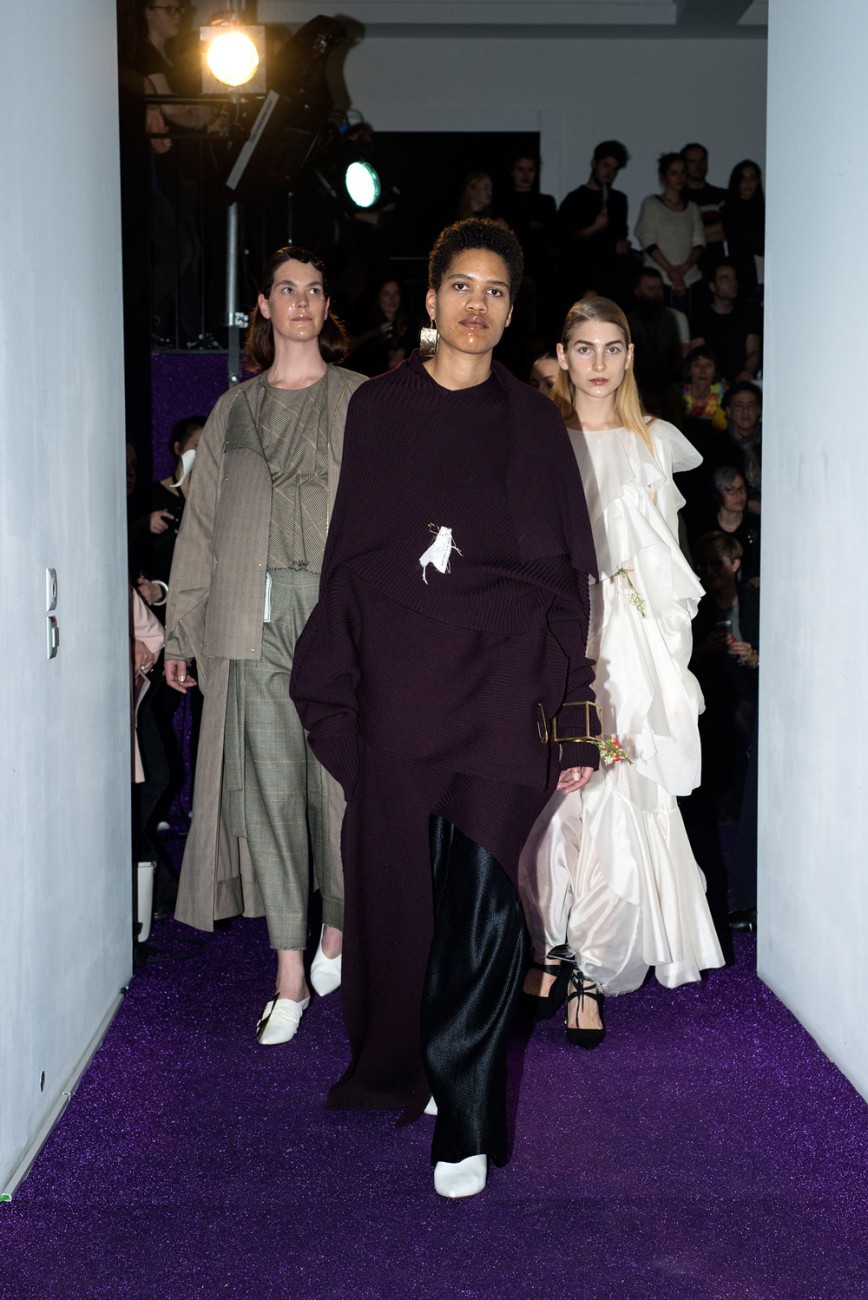 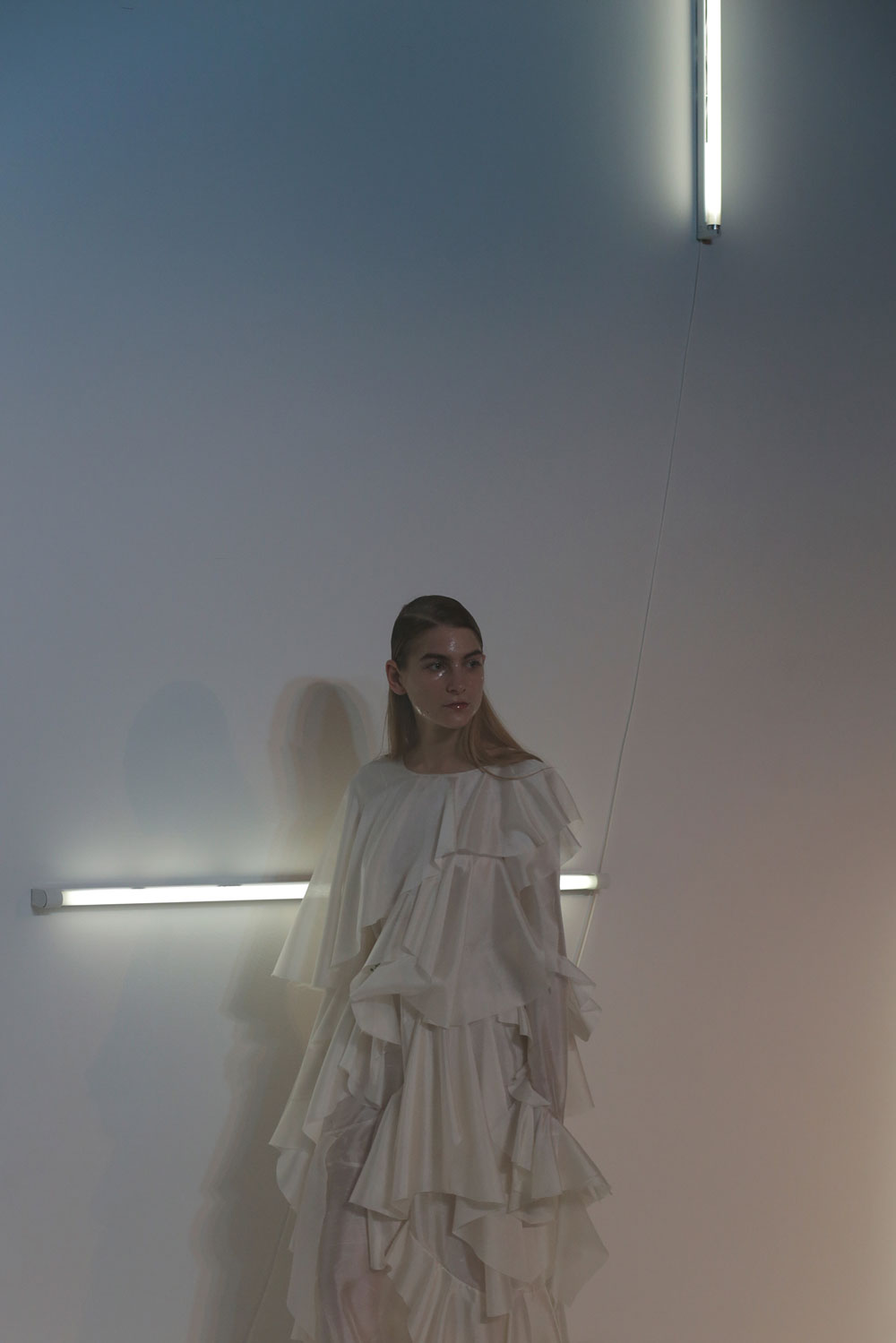 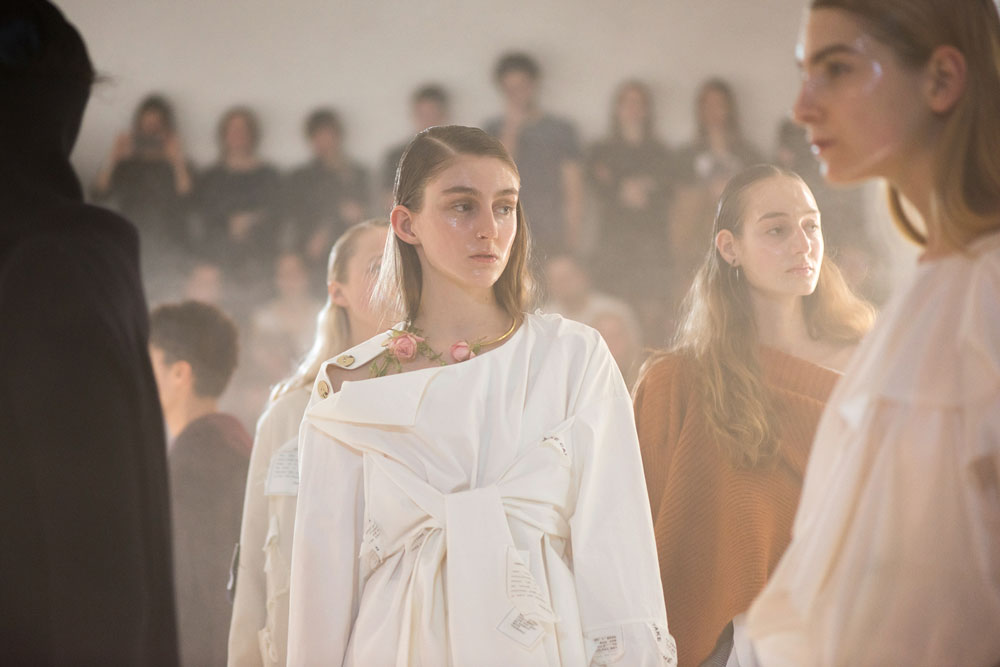 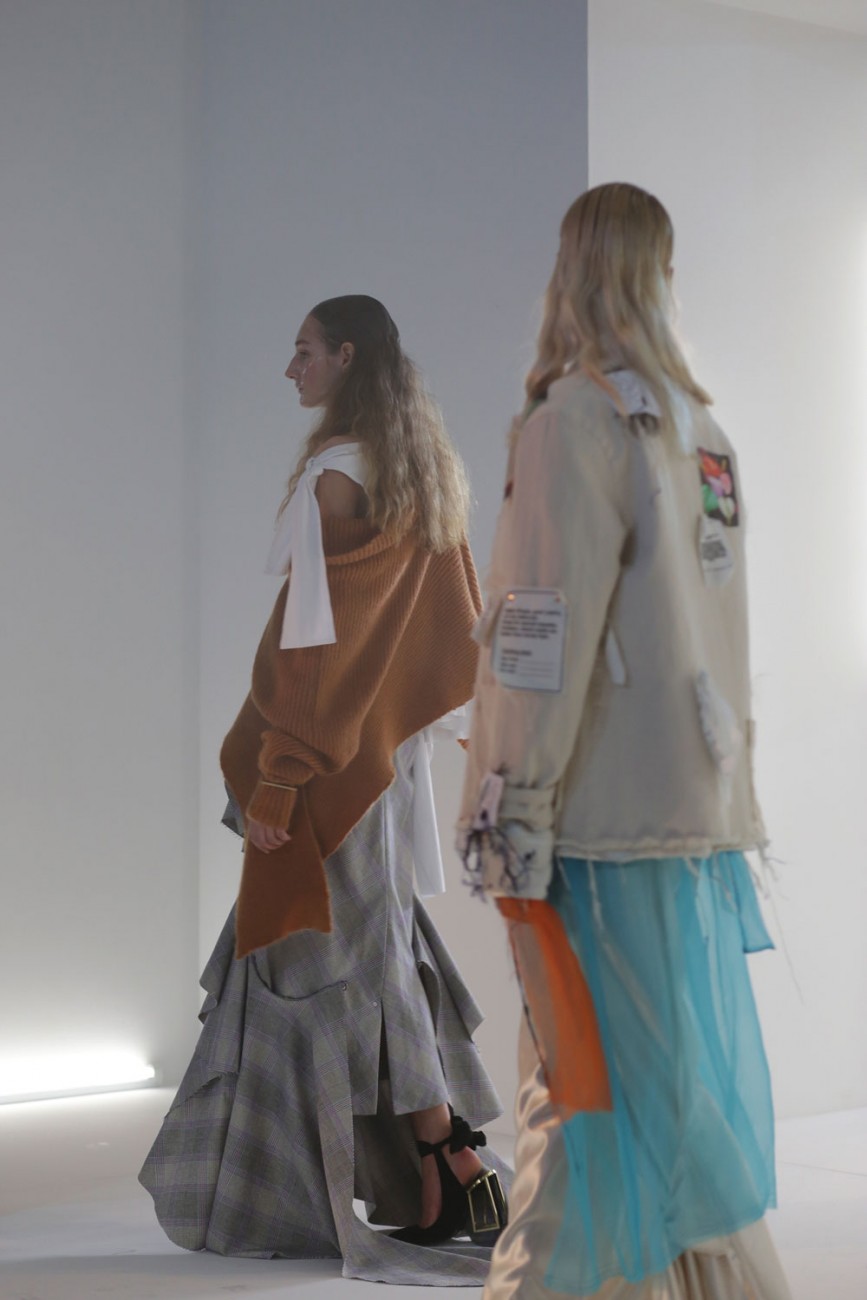 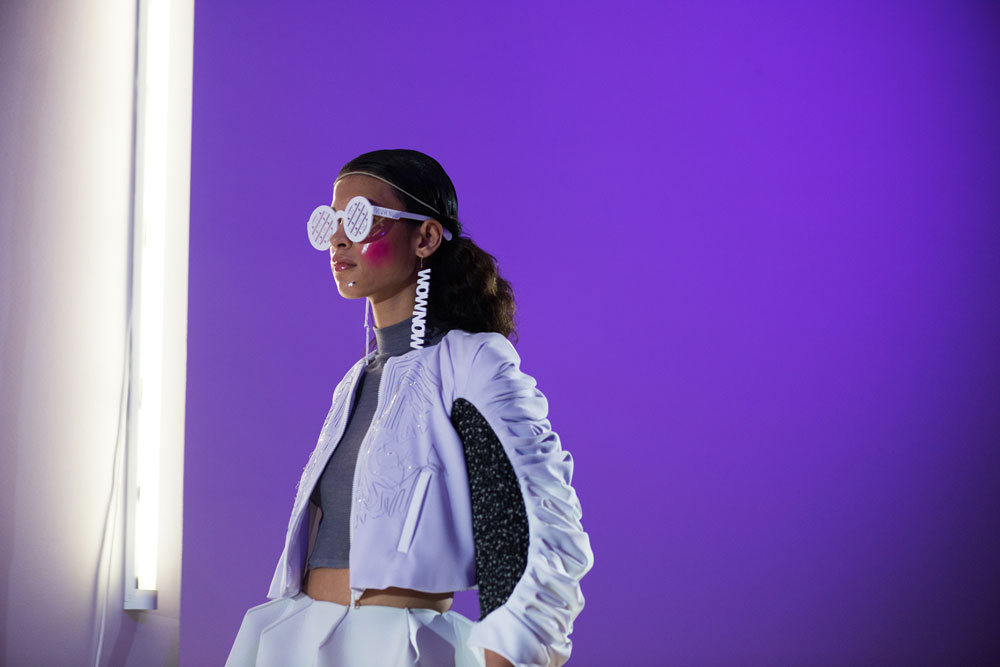 Tuyet-Trinh Ly’s collection represents what seems to have be the unanimous stand out, with dramatically sculptural pieces that followed in the constructionalist footsteps of Cristobal Balenciaga. Yet the œuvre of the revered Basque did not in fact serve as an explicit point of reference for Ly’s work, with this accolade awarded to something altogether more humble: packaging. Transforming the 3 dimensional, a bottle for example, into flat forms, Ly employed the resulting templates as patterns for her work, giving way to voluminous gathered sleeves and wide-legged pleated trousers. Most impressive was Ly’s mastery of fiddly techniques, with the component panels and pleats of each skirt dead symmetrical, displaying faultless seams across a range of often stiff, rugged fabrics. With the collection entitled “WOWNOW”, as perhaps might have been gleaned from the range of branded accessories, thoughts may be tempted to wander towards comparisons with Gareth Pugh on account of the uncanny, though assumedly unwitting, aural similarity to the Pugh-affiliated ‘!WOWOW!’ collective. However, with such a considered balancing act of precise construction and theatrical volume & proportion on show, such comparisons would be far from unfounded. 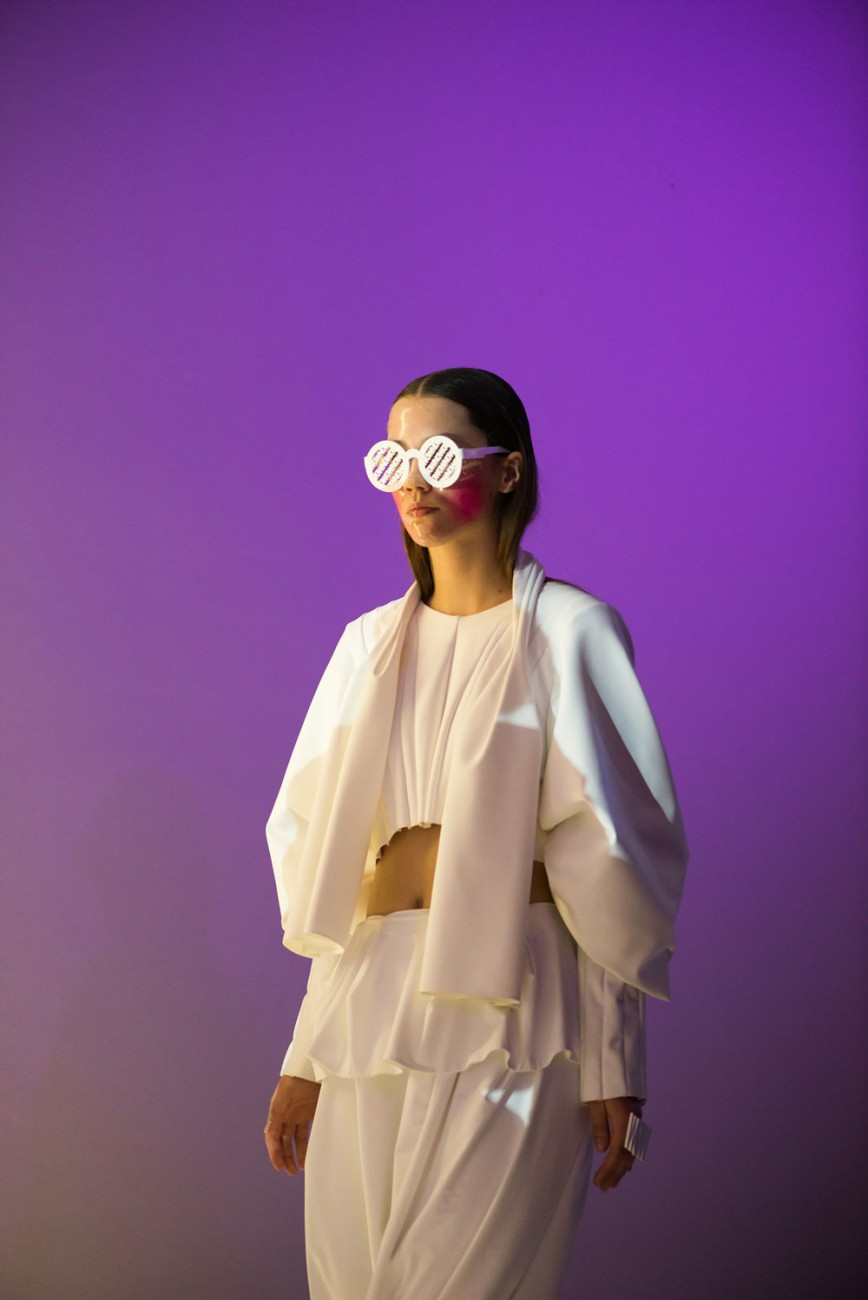 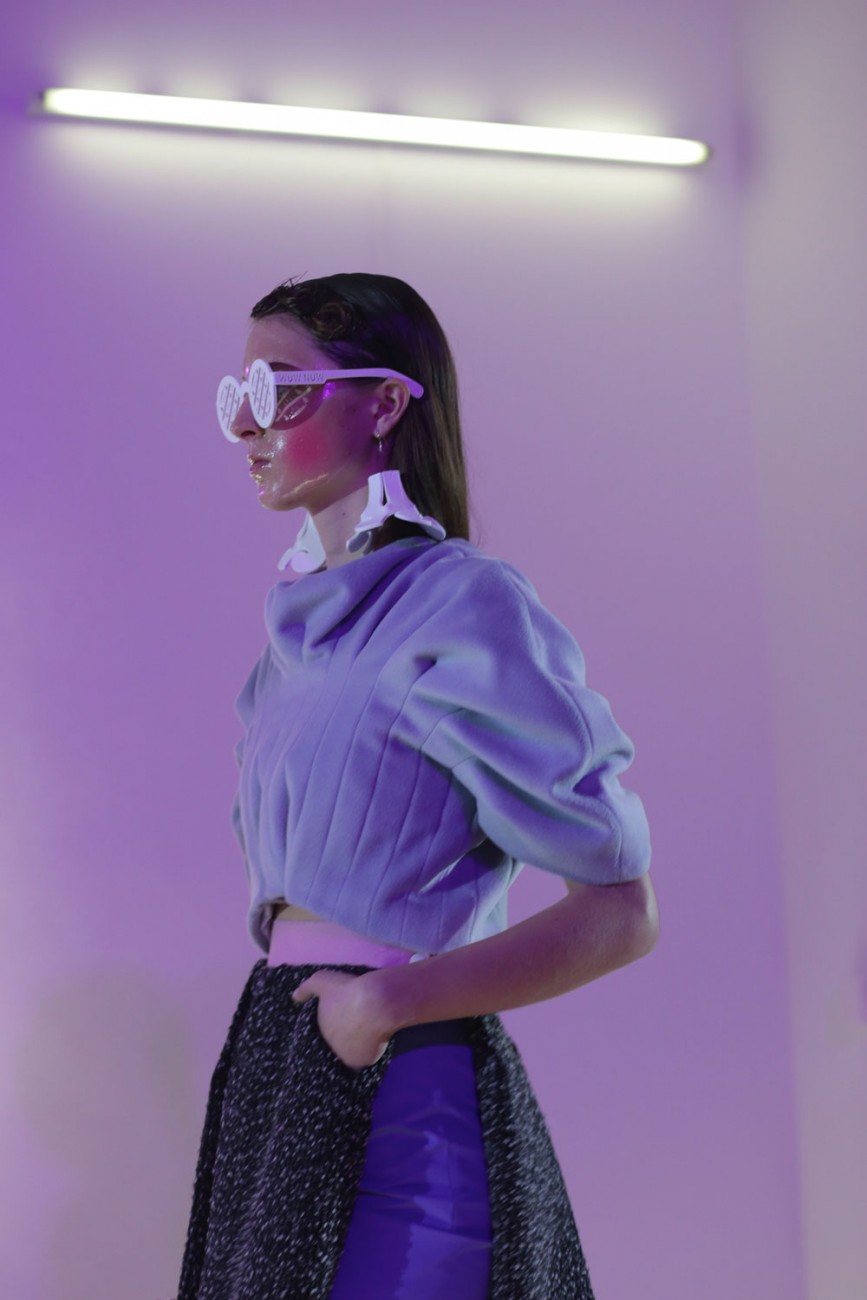 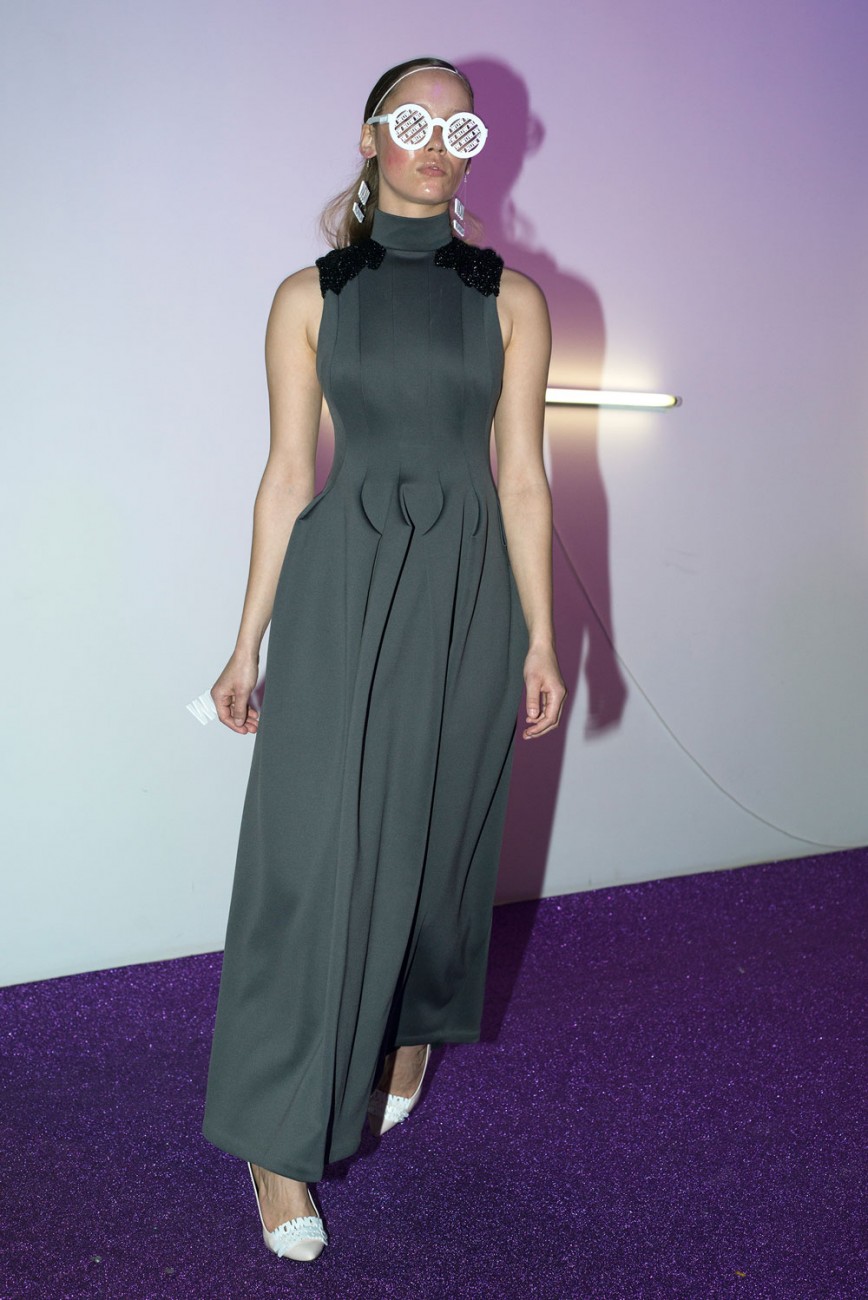 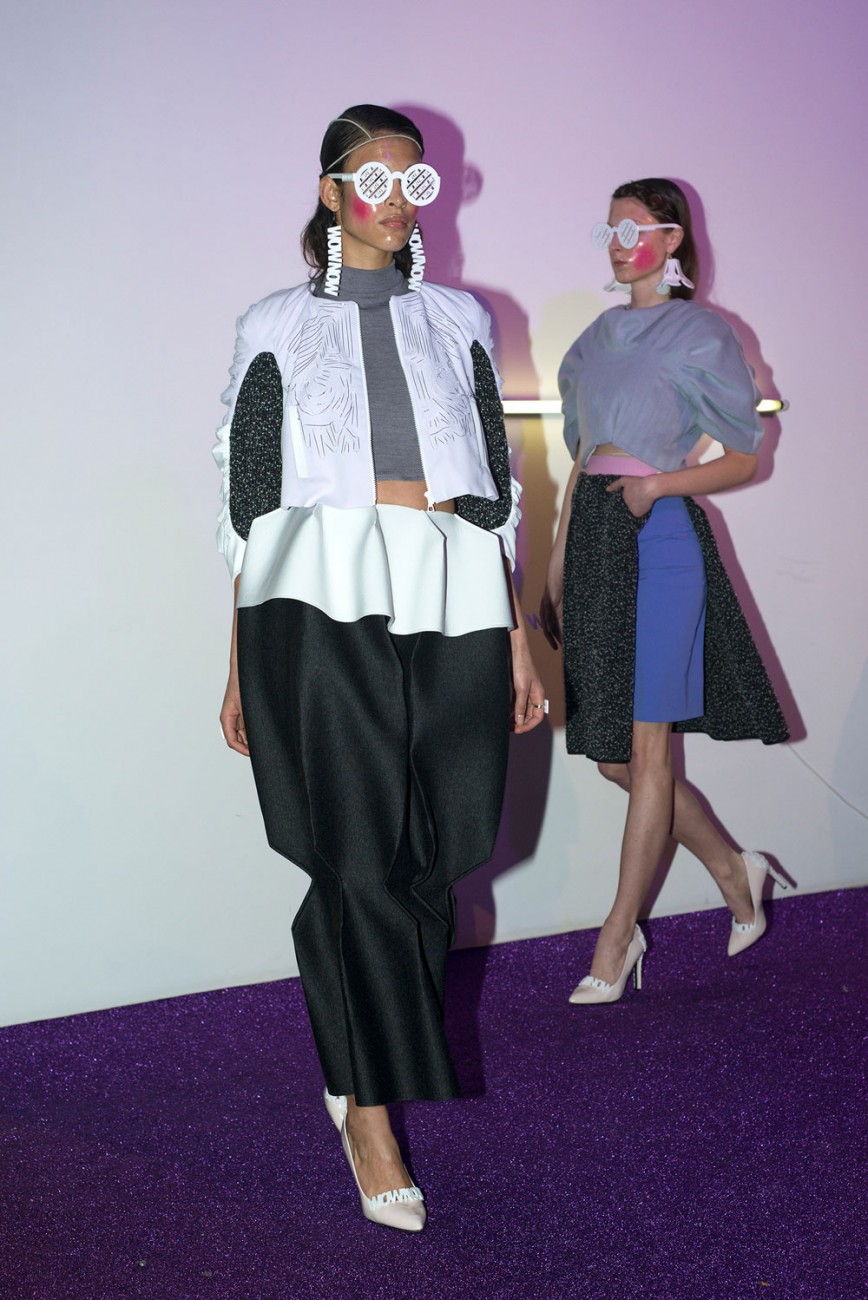 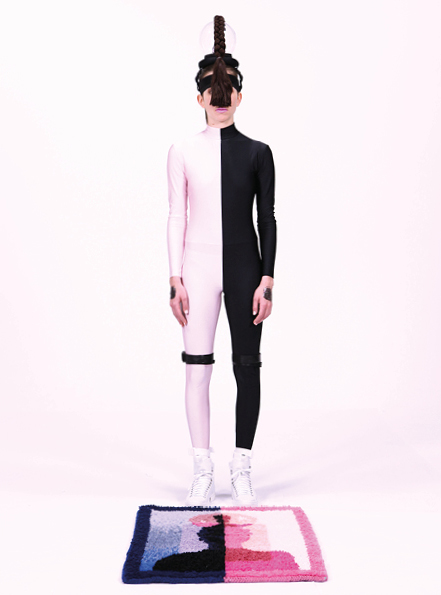 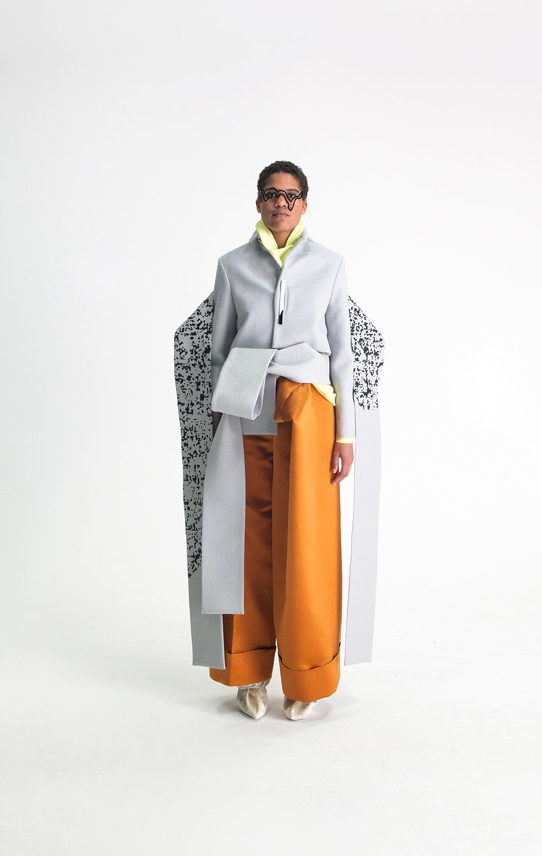 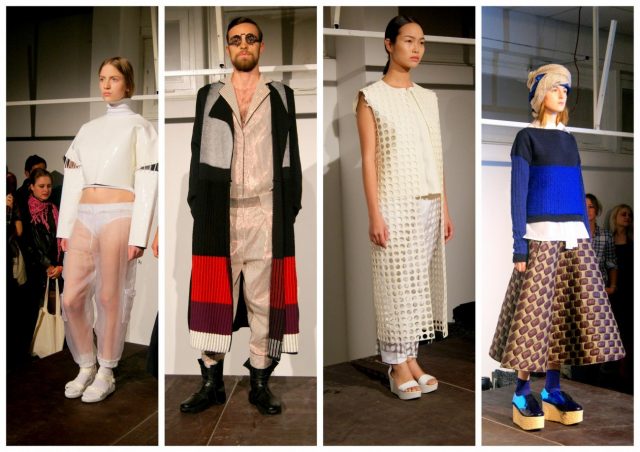 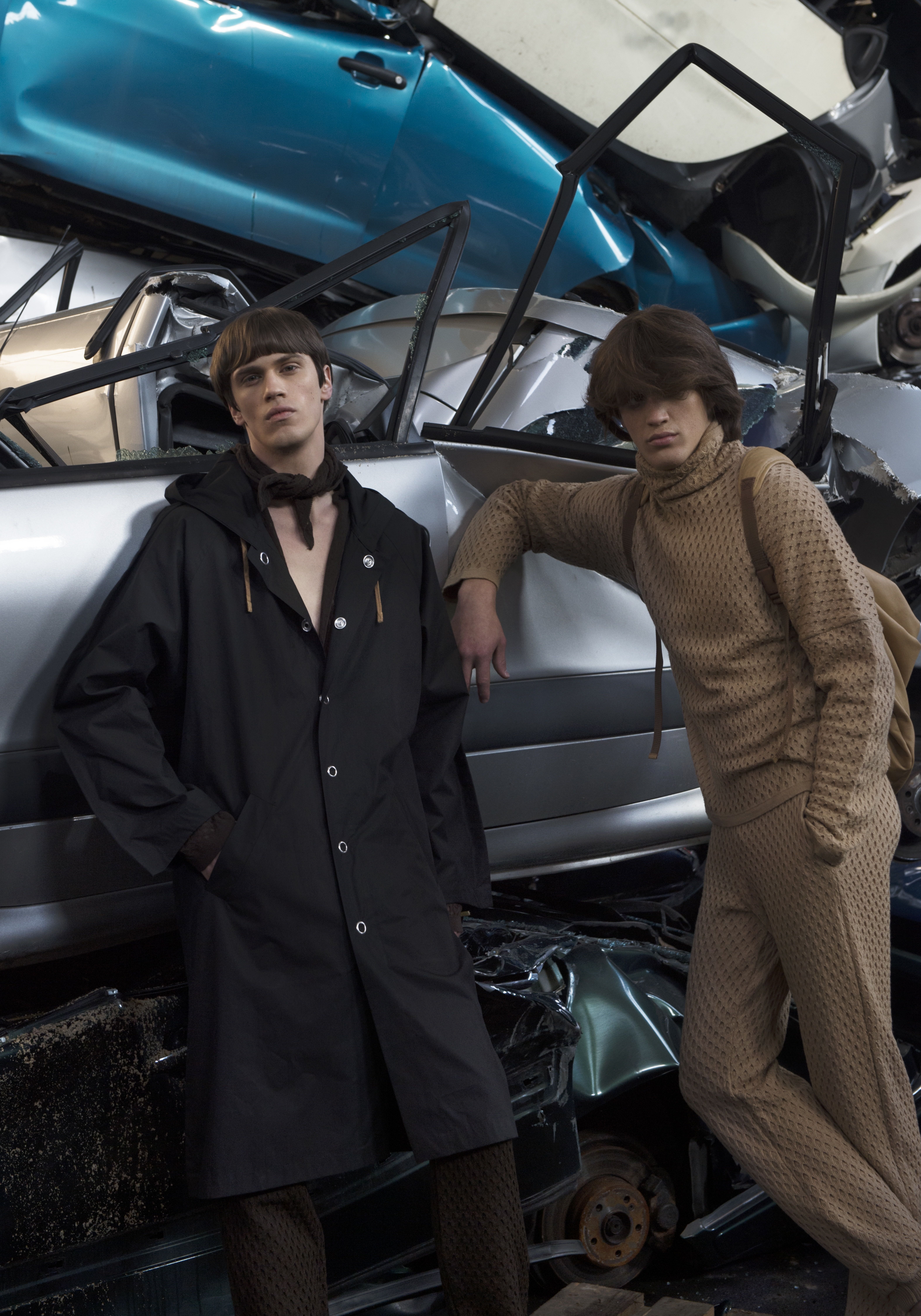