With Berlin Fashion Week on the horizon, Marina Hoermanseder is one of the most buzzed-about names in the city. With her early collections receiving a staggering amount of positive feedback, everyone in Berlin awaits her next move. The designer, whose unique take on leather craftsmanship has gained international traction, continues to thrill consumers and critics with her talent and innovation. We recently stopped by her studio to chat about

You commenced your education in Vienna in business after which you went on to ESMOD in Berlin. Was it always your plan to end up in fashion?

International Business was my parents’ ultimatum to me. I wanted to study fashion ever since I was 15 years old, but they wanted me to study something before that. It’s not a bad thing, though. Obviously that wasn’t the easiest way since fashion was still in the back of my mind. Then I mastered in London and Hawaii, so I learned a lot. It helps to not only be an artist, but to understand what a return-on-investment is. At the end of the day, I don’t want to only serve art. I’m starting a company to make money, not only to be an artist. That is my passion at the end, but one can not forget that everything is based on a business plan. So that is why that first education of mine was so helpful. It made me less emotional and realize that it’s not bad to design commercial things like rings in order to grow. You’re not automatically not a designer, merely because you’re designing some commercial pieces as well.

At the end of your education you enjoyed an internship at Alexander McQueen. What did you take from that experience into your own company?

I’ve never learned so much as with McQueen. It was the hardest traineeship ever, which was really beneficial since that was right before my final collection. I was already in a flow of only working really hard and having no sleep. Before the internship, I didn’t think I could work those long hours. Another thing I learned is that you have to redo designs 20 times until they work. You have to be able the throw something in the corner and then start all over again for the sake of perfection. ‘This is not possible” is a sentence that does not exist at McQueen, nor here.

You showed your collection in many cities including Paris, Dubai and London and then ended up here for Berlin Fashion Week. Why did you choose to settle in Berlin?

Biggest reason being that everything went so fast. Three months after my diploma collection, I started my own label. I had my infrastructure and connections here in Berlin. During your education you get the opportunity to meet a lot of people and are forced to find industry professionals, for example, to set up your collection shoot. My network was here. I know where to go or who to call when I need something. Considering how fast everything went, I simply couldn’t have done this in another city. Building up a network somewhere else would have taken too much time.

Coming back to Berlin was also a matter of following my heart. Now when looking back, I’m so grateful since the Berlin audience was so thankful from the very first show. IMG Berlin only knew eight pieces of mine and nevertheless gave me this unconditional opportunity to have a runway show. I don’t know if I would have gotten this trust from another city.

As we all know many of your silhouettes include body-con corsets. Where does this fascination come from?

It’s funny because before I was at McQueen, I wasn’t very fond of clothes being close to the body. I designed further away from it, but at my internship I kind of got indoctrinated for corsets and body molding. Maybe I was a bit brainwashed, thus after my internship I learned to design laced corsets – the Victorian corsets – and while researching that I got in touch with orthopedic corsets. It was all made by hand in leather and wood. Since leather was the more efficient material, I used that. I haven’t let go of that ever since. The new collection now is not that close to the body, though.

Hoermanseder got in touch with orthopedic corsets whilst conducting research on the Victorian ones.

I just wanted to talk about your next collections. When looking at your passed seasons, I feel that more and more you play with the buckles and corsets in stark contrast with girly and playful elements. Are you gradually finding yourself and your style?

No, I think it has more to do with the mood of the collection. The summer collection was very girly and I loved it since that actually is quite close to my personal style, but when looking at the new collection one sees that it is already totally different. It’s not girly at all, but very ‘madame’. It’s very sophisticated and mainly because it’s a winter collection. In summer you’re always more free to use playful bustiers and girly silhouettes. I’m already working on next summer’s collection, which will be even more playful. In winter you take away those elements because a cashmere coat will have a nice collar which will always look more sophisticated than a little skirt. The contrast will always somehow be there since I will not let go of leather. Nevertheless I am designing commercial pieces more often. Customers who enter the store will look at the leather corset, but will go to the counter with a coat.

Since many of your pieces are avant-garde, how important is it for you to be commercial? When you design those corsets, do you really envision women on the street wearing them?

Not at all! That is very important as well: I don’t care if the leather pieces are wearable. My special pieces I have to combine with wearable ones. I also want to send a message to show that I’m also able to make clothes–that the patterns are nice and detailed and that there’s a nice pocket for example. At the end of the day I want the customer to slip into my designs and feel at home and at ease, even though some of the pieces are basic.

She not only focuses on the special leather pieces, but also puts effort in designing high quality basics that feel like home.

Quite recently FKA Twigs wore a piece of yours. What went through your mind when you saw that?

They sent me an image right away and I had tears in my eyes. It is always like that every time I’m overwhelmed. Even though there has already been celebrities and nice publications featuring my designs, I still don’t expect anything to happen. If people tell me how cool something is, I don’t believe them. The perception from outside is always more positive and spectacular then your own. I’m just doing my job and when I succeed I’m extremely happy, but then I have to continue working. I do my social media work, spread that good news and over it is. When something like that happens, I try not to spend too much of that positive energy at once. I have to save some for the moment when it gets tough. That is why it does not appear that I’m freaking out, I’m actually saving that energy for difficult times which will also come since I have been so lucky from the very beginning.

Lately you’ve been getting a lot of positive attention though. The label grows fast pace. Where do you see the brand heading?

If you asked me that question one year ago, I wouldn’t have had an answer ready. I would have never dreamt of giving you the answer with the situation as it currently is. We’re a team that believes in it and we’ll do whatever it takes to make it big, but it’s still difficult to get my head around. Last year I would have never guessed people would like my designs that much. Maybe I’m too grounded. Business-wise, we’re thinking ahead though. I believe Marina Hoermanseder has international potential. I want to continue doing fashion weeks in Berlin because I feel very connected to this city and I believe in loyalty. I don’t think it’s fair to stay in a city and as soon as you grow head to another one.

Commercially, social media is a big issue for us at the moment. We’re aiming for the United States – that is a big market at the moment. I have orders over Instagram – as FKA Twig’s order – and I find it amazing that people see someone on social media and then give it a chance by ordering a piece wherever it may be. Only doing fashion weeks will get you great German press, but there are different markets out there. Markets that look at your stuff and buy something, just because they believe in your designs. I will always be present in Germany, though. Recently. I got new stockists in Kuwait; that is also an interesting market.

That’s very interesting because most European designers firstly look at the European market.

The commercial power is not in Europe anymore. A European will buy a classic and renowned Céline bag, but internationally people support you if it’s cool. Nothing against Céline though (laughs).

For the Asian market I don’t feel ready yet. It will probably be one of the last markets that I enter. I think it has to do with the logistics. I also want to learn more about the culture and customs there. I don’t take any measures before being two hundred percent informed. I’d rather wait five years before entering Asia, than risk being inconsiderate and rude to their way of doing business. 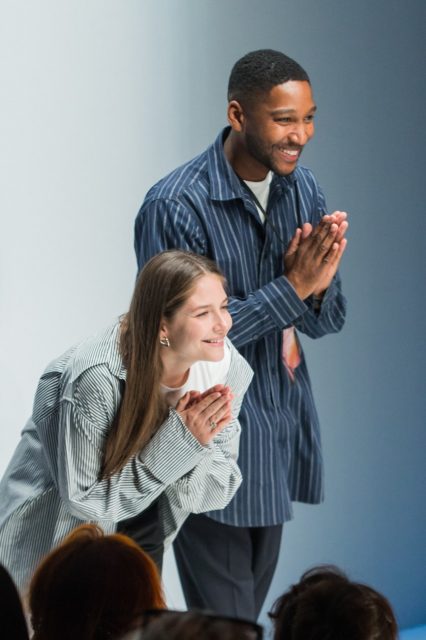 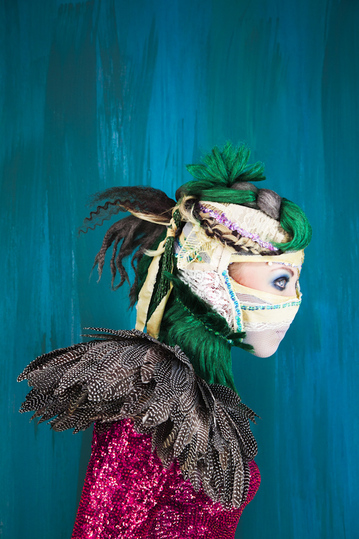 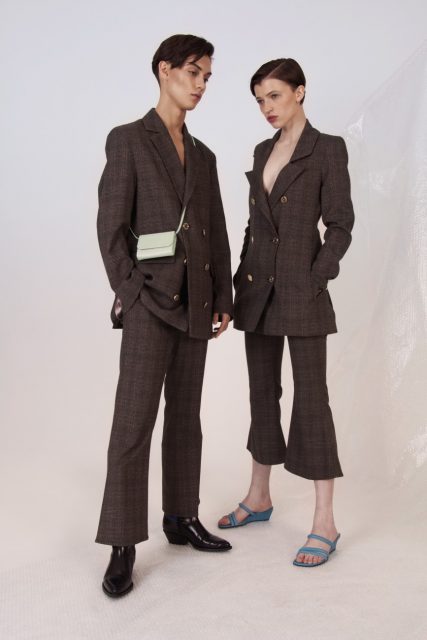 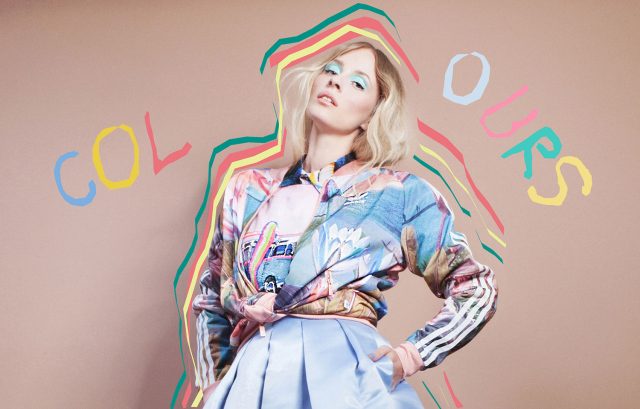